Adrenaline -- a go-to treatment during cardiac arrest -- might cause crippling brain damage, according to a new study.

Permanent brain damage or help during a heart attack? One new study in the UK explores how a popular treatment for cardiac arrest could come with more risks than anticipated.

More than 30,000 people have cardiac arrest instances each year in the United Kingdom alone. Only 10 percent of those suffering a cardiac arrest survive long enough to be discharged from the hospital. In the United States, 475,000 Americans die yearly from cardiac arrest -- making it a bigger killer than most cancers, auto accidence, and firearm deaths. One of the most common ways to address cardiac arrests is by using adrenaline shots to restart the heart.

Those shots are now under scrutiny, thanks to a new study. Doctors examined more than 8,000 people across Britain and discovered those common adrenaline shots only increase a person's survival rate by less than 1 percent. However, the adrenaline shots are affecting the brain rather than the heart. Nearly a third of survivors who received the adrenaline shot wound up in a vegetative state or could no longer take care of themselves. This was a stark comparison to those 18 percent of survivors who ended up the same way after a placebo.

“What we’ve shown is that adrenaline can restart the heart but it is no good for the brain,” said study leader Gavin Perkins, a professor of critical care medicine at the University of Warwick and a consultant physician at Heart of England NHS Foundation Trust.

Adrenaline became a common treatment over 50 years ago in the UK. It's applied to those unresponsive to CPR or a defibrillator after experiencing cardiac arrest.

“Make no mistake, the results of this landmark trial will change the way people are treated if, unfortunately, their heart should stop,” said David Nunan, a senior researcher at the University of Oxford Centre for Evidence Based Medicine, who was not involved in the study. “Until now, everyone who’s been eligible to receive adrenaline would have been given it without question. That can no longer be the case.” 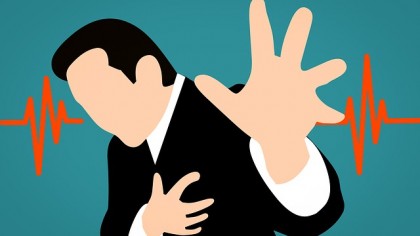 The most recent trial involved in the study gathered some controversy. Paramedics in five regions within the UK were given two types of packets -- filled with adrenaline syringes or filled with a placebo. If CPR or a defibrillator failed, paramedics would apply whatever was in the syringe.

The paramedics, however, had no idea what they were distributing. The areas that were undergoing the trial told residents about the study and gave them an option to wear a "no study" bracelet if they didn't want to take part.

“These results will have a major impact on the way cardiac arrests are treated around the world,” said Nilesh Samani, medical director of the British Heart Foundation and a professor of cardiology at the University of Leicester. “Using adrenaline to treat people after a cardiac arrest was based on sound reasoning, but not on robust evidence.”

The full study, published in the New England Journal of Medicine, has been called "groundbreaking" by a number of researchers.

“I would absolutely want this evidence to be taken into account for future guidelines,” said Jonathan Wyllie, president of the Resuscitation Council UK and professor of neonatology at Durham University. “If I ever require resuscitation, I hope it is based on evidence such as this rather than merely the opinion of experts.”