For those assuming e-cigarettes are the 'healthier' alternative to their more traditional counterparts, think again. A new study published in the SAGE journal Vascular Medicine details exactly how much of an impact e-cigs have on the human cardiovascular system.

The study indicates that smokers of popular e-cigs will often experience the same levels of cardiovascular elevation after smoking for prolonged periods of time. These levels could even be higher than those found in regular smokers. While e-cigs have been seen as a popular and trendy alternative to tobacco-based cigarettes, the study's results could change that narrative.

An international team of researchers led by Klaas Frederik Franzen monitored participants before, during, and after smoking. Frazen and his team had the participants smoke a cigarette, an e-cigarette, and a nicotine-free e-cigarette. Each smoking session lasted at least 5 minutes, and the team tracked vitals the duration of the smoking and up to 2 hours after the smoking stopped.

"The increased parameters within the nicotine containing devices might be a link to an increased cardiovascular risk which is well known for cigarettes," Franzen and his team concluded. 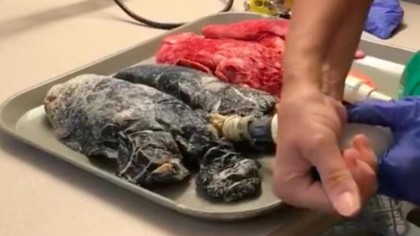 Traditional tobacco cigarettes kill more than half of its users. According to the World Health Organization, more than 7 million people die each year because of traditional cigarettes. Over 6 million of those deaths involve the smokers themselves. The rest of the deaths come as a result of non-smokers being exposed to second-hand smoke on a consistent basis.

To offset some of these issues with traditional cigarettes, smokers have switched to electronic cigarette options. However, those cigarettes still often include nicotine and a host of other issues. These include ultrafine particles that can be inhaled deeply into the lungs, volatile organic compounds, metals like nickel, tin and lead, and flavorants containing chemicals linked to lung disease and other cardiovascular issues.

The researchers admit that there need to be more studies done about the effects e-cigs specifically have on the human cardiovascular system. Right now, this study is one of a handful to be published on the subject:

"Future trials should focus on chronic effects of vaping nicotine-containing or nicotine free liquids on peripheral and central blood pressures as well as on arterial stiffness. Since no endothelial dysfunction nor gender differences were described for three different arms in literature, it would be important for future trials to address these items."