Researchers found that each of the last three major ice ages were preceded by tropical “arc-continent collisions.”

SEE ALSO: YOU WON'T BELIEVE HOW THE WORLD LOOKED 300 MILLION YEARS AGO

What they found was that each of the last three major ice ages was preceded by tropical “arc-continent collisions.” These are tectonic pileups that take place near the Earth’s equator.

During these pileups oceanic plates ride up over continental plates, exposing them to unfamiliar environments. In the case of the major ice ages, the environment was a tropical one.

The researchers speculate that the resulting tropical heat and humidity at the time may have triggered a chemical reaction between the rocks and the atmosphere which lead to the ice ages.

“We think that arc-continent collisions at low latitudes are the trigger for global cooling,” says Oliver Jagoutz, an associate professor in MIT’s Department of Earth, Atmospheric, and Planetary Sciences.

“This could occur over 1-5 million square kilometers, which sounds like a lot. But in reality, it’s a very thin strip of Earth, sitting in the right location, that can change the global climate.”

The researchers further examined to see whether other much older ice ages were associated with similar arc-continent collisions. They found three periods over the last 540 million years that fit those criteria. 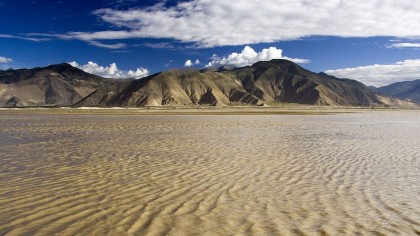 Jagoutz added that a major suture zone is still active today in Indonesia. He speculates it could be the cause for the Earth's current glacial period.

This zone includes some of the largest ophiolite bodies in the world. Ophiolites are sections of the Earth's oceanic crust that have been uplifted to above sea levels.

These regions are so effective at absorbing carbon dioxide that some scientists have proposed grinding up ophiolites to delay global warming.

However, Jagoutz warns against this option. “It’s a challenge to make this process work on human timescales,” Jagoutz says. “The Earth does this in a slow, geological process that has nothing to do with what we do to the Earth today. And it will neither harm us, nor save us.”

Mining Company Blows Up 46,000-Year-Old Ice Age Settlement and Is Not Sorry