New research is arguing that youth suicides are often spontaneous acts of despair that may be prevented with proper architecture.

According to the World Health Organisation, close to 800,000 people commit suicide every year, an equivalent of one person every 40 seconds. However, new research is revealing that some of these saddening deaths could be avoided simply through better architecture.

An interesting and important theory

Charlotta Thodelius, a researcher at Chalmers University of Technology, Sweden, is arguing that, particularly for youth, a more thoughtful built environment could see a significant decrease in suicides. This may sound odd at first glance, but Thodelius' theory gives much to think about.

"I have observed that younger people commit a different type of suicide from adults," said Charlotta Thodelius.

"They are spontaneous and act very impulsively. They might not want to actually die, they just want something to stop. It might be something that has been going on for a while, but it can also be something that, as adults, we might find quite trivial - breaking up with a partner, fighting with parents, doing badly in a test, or being gossiped about."

The researcher reveals that suicide is the second most common cause of death among young people globally but that their approach to the act is far different from that of adults. Youth suicide, she argues, is more of an act of despair from not being able to tolerate something at the moment. 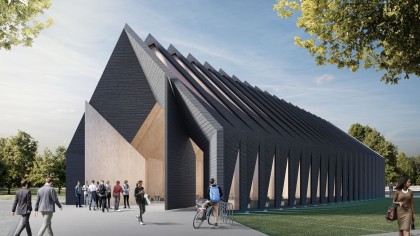 "If you compare with suicide among adults, that is usually more well-planned. Bills are paid, letters are sent, and a place is chosen where they won't be easily found beforehand - out in the woods, or in a hotel room."

As such, simply not having access to a location to commit the act could be a big deterrent for youth. This may lead them to opt for a plan B.

Thodelius reveals that additional research, mainly in the USA, has already found that when obstacles were set up in an environment to stop suicides, suicide rates decreased. Better yet, there was no equivalent increase in other spots, meaning the measure was effective.

"There are therefore good reasons to modify the built environment around known hotspots and try to avoid creating new ones in city development," added Thodelius.

The greatest need for this new type of architecture is in desolate areas, according to Thodelius. Popular areas with a lot of foot traffic do not lead to suicides.

Early measures in the design phase

However, argues the researcher, it is important that these new architectural changes are incorporated logically into buildings as not to create disturbances in the everyday function of a location. As such, it is better that these measures are implemented early on, hopefully in the design phase.

"The best thing is to understand and adopt this perspective as early as the planning stage for new buildings and city areas," said  Thodelius.

However, do not fear that it is too late for existing structures. The researcher argues that pleasant adjustments can be created even after construction that will not interfere with a location's functionality.