Study Reveals the Ocean Will Shift Color This Century

According to MIT, climate change is now affecting the phytoplankton in our oceans responsible for the blue and green hues visible via satellite.

Our world's oceans are in trouble there is no doubt about that. Just the mere amount of plastic waste they now hold is enough to cause major concern, but it seems there is more upcoming troublesome news.

A change in phytoplankton

According to MIT, climate change is now affecting the phytoplankton in our oceans. Phytoplankton are mostly single-celled microscopic organisms that live in watery environments.

SEE ALSO: What Do We Do About Plastics?

Just like plants, they have chlorophyll to capture sunlight and use photosynthesis to transform it into chemical energy, taking in carbon dioxide and releasing oxygen.

They serve as food to many aquatic animals but can also become dangerous. Certain species of phytoplankton can produce powerful biotoxins resulting in toxic blooms that can kill marine life and contaminate seafood.

Now, MIT is saying the changes in these organisms will be so extreme that they would cause a change in surface color of the oceans by the end of the 21st century. This might not seem so bad at first glance, but things are more complicated than they seem.

"There will be a noticeable difference in the color of 50 percent of the ocean by the end of the 21st century," said Stephanie Dutkiewicz, a principal research scientist at MIT’s Department of Earth, Atmospheric, and Planetary Sciences and the Joint Program on the Science and Policy of Global Change.

"It could be potentially quite serious. Different types of phytoplankton absorb light differently, and if climate change shifts one community of phytoplankton to another, that will also change the types of food webs they can support."

According to the researchers, the ocean will see its blue and green regions intensify so much so that satellite imaging will detect these the new hues. To come to these conclusions, the scientists developed a global computer model that simulates the growth and interaction of different species of phytoplankton as well as the way they absorb and reflect light. 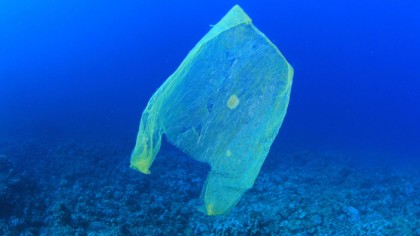 "The model suggests the changes won't appear huge to the naked eye, and the ocean will still look like it has blue regions in the subtropics and greener regions near the equator and poles," said  Dutkiewicz.

"That basic pattern will still be there. But it'll be enough different that it will affect the rest of the food web that phytoplankton supports."

What the new hues will essentially reflect is life in those regions. The deeper blue regions will indicate less phytoplankton and therefore less marine life. The deeper green hues will reveal larger blooms of more diverse phytoplankton resulting in higher levels of aquatic life.

Time will tell how these predictions pan out. Here is hoping that despite all this our ocean's will be able to maintain their rich biodiversity.

How Will We Find Life on Ocean Worlds?