Since the effects of rising emissions are slower to show on sea levels, their impact may be ignored until too late, warns new research.

A new study published this week in Nature Climate Change is raising some alarming bells regarding the impact of climate change on sea levels. The research reveals that even in the best case scenarios outlined in the Paris Agreement, sea levels will continue to rise at dangerous levels, faster than we expect.

“When we pump more carbon into the atmosphere, the effect on temperature is almost immediate,” said Oregon State University climate scientist and lead author on the study Peter Clark in a statement. “But sea level rise takes a lot longer to respond to that warming."

Clark used the analogy of an ice cube to explain the phenomenon indicating that ice left on a sidewalk won't melt immediately. “The same is true for ice sheets. It takes time for them to melt so that the resulting sea level rise will continue for hundreds to thousands of years after we’re done emitting carbon,” he further explained.

And the news only gets worse from there. Today, scientists estimate we are on track to reach the much-feared 2-degree threshold in about 60 years.

On the bright side, we know how much carbon we must avoid emitting to not pass this threshold. The authors argue we need to now apply those targets to sea live rise thresholds as well.

"We need to ask if there is a target for sea level rise – much like the 2-degree threshold that was established for global warming," explained Clark. The authors warn that if cumulative CO2 emissions rise to 3,000 billion tons, we could witness a dangerous sea level rise of between 30 to 40 meters.

“The big question is whether we can stabilize the system and find new energy sources. If not, we’re on the way to a slow-motion catastrophe."

“The big question is whether we can stabilize the system and find new energy sources. If not, we’re on the way to a slow-motion catastrophe," said Alan Mix, an Oregon State University oceanographer and co-author on the study.

Meanwhile, the study estimates economic losses in coastal cities due to flooding could reach $1 trillion by 2050. That amount could be reduced to $60 billion through the introduction of coastal defenses but these measures would only provide short-term solutions.

“You can build a one-meter seawall,” Clark said. “But what do you do when sea levels rise by two, or five, or 10 meters?" 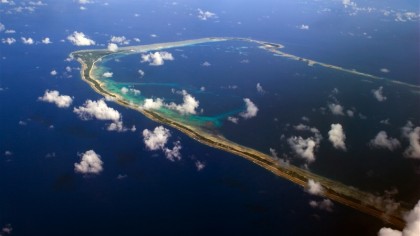 The authors advise that we use the slower response time of sea levels to begin adaptation strategies before climate change impacts take effect. This is especially necessary for the one billion people generally living in poorer conditions in coastal zones globally.

These populations, in particular, are dependent on the ocean for their livelihood. A "well-defined relationship between global mean sea-level rise and cumulative carbon emissions" is crucial to inform future policies that take a comprehensive approach to global warming into account, argues the paper.