A robot has been used to identify the location of melted uranium at the Fukushima nuclear disaster site.

Six years after the nuclear disaster at the Fukushima Daiichi Nuclear Power Plant in Ōkuma, Fukushima investigators have been able to capture images of melted uranium fuel present in its ruined Unit 3 reactor. 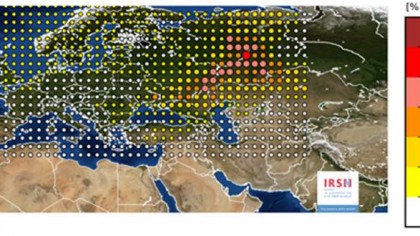 The nuclear disaster was caused by the massive tsunami created by the Tōhoku earthquake on March 11, 2011. The accident at the plant caused three of the six nuclear reactors to melt down. This meant the reactor's uranium fuel rods liquefied and melted through layers of steel and concrete. This melted combination of materials made it very difficult for investigators at the site to determine where the uranium ended up. “Until now, we didn’t know exactly where the fuel was, or what it looked like,” said Takahiro Kimoto, a general manager at the company that operated the plant’s nuclear power arm. “Now that we have seen it, we can make plans to retrieve it.” The success of the drone is seen as the beginning of a determined cleanup process and a sign that the disaster that haunted the area for the last six years is finally beginning another chapter.

More than 7,000 employees are at the site as part of the cleanup process. These workers are tasked with constructing new water storage tanks and disposing of radioactive debris. Badly damaged buildings on the site are having scaffolding built over the top of them. The work is definitely contributing to the safety of the site with safety precautions slowly being reeled back. A year ago, full protective gear was required in all parts of the site, that has been scaled back to only be required on the most damaged and toxic areas of the site. Street clothes can be worn safely on the majority of the site by workers.

The entire project will take approximately 30 to 40 years of almost continual cleaning up to restore the site. Estimated cleaning up costs are over tens of billions of dollars. The next major step is removing the newly identified melted uranium fuel from one of the reactors. This mammoth task will start in 2021, though authorities are yet to announce which reactor will be done first.

At the time of the disaster, the Japanese government imposed a 20 km exclusion zone around the power plant. It is thought that more than 150,000 people were evacuated from the area. Studies by the World Health Organization (WHO) predict that infant girls living in the area at the time of the disaster have a 70% higher risk of developing thyroid cancer and that there is a 7% higher risk for leukemia in infant males. A 2015 report on the disaster estimates that approximately 32 million people have been affected by the disaster. This number includes people who were initially exposed to the nuclear threat as well people who suffered from stress and other factors resulting from the accident.