One company wants to make sugarcane the most viable option for biofuel success by tapping into the oils produced during the sugarcane-making process.

With global temperatures and carbon emissions both on the rise, most industries around the world are looking for ways to cut back on emissions. The rapidly expanding aviation industry is looking to new and unexpected resources to develop new fuel and ultimately cut back on greenhouse gas sources.

Airlines feel some of the biggest blows during global oil fluctuations, and those changes ultimately affect passengers in the way of rising prices. And, as air travel is expected to double in the next 20 years, dependency on traditional jet fuels will affect more people. However, biofuels are being developed to offset major airlines' need for traditional jet fuels and one of the most interesting developments has been in sugarcane.

Sugarcane as a Biofuel

The lipids produced in sugarcane production can create bio-jet fuel. One recent study found that using engineered sugarcane creates more than 2,500 liters of biofuel per acre of land. A Boeing 747 could fly for just over 10 hours on biofuel from 54 acres of land. This "lipidcane" produces 15 times more fuel per land than soybeans and 13 times more fuel than jatropha. 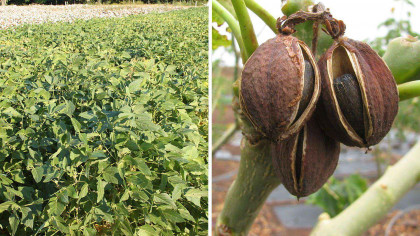 7 Important Biofuel Crops That We Use for Fuel Production

Sugarcane, along with other biofuels, represents a promising future for biodiesels. Biodiesels create 93 percent more energy than what's needed to make it, according to one study. A research project called PETROSS (short for Plants Engineered to Replace Oil in Sugarcane and Sorghum) has been working to make sugarcane a go-to biofuel since 2012.

"Since [2012], through genetic engineering, we’ve increased production of oil and fatty acids to achieve 12 percent oil in the leaves of sugarcane," the company noted.

"Now we are working to achieve 20 percent oil – the theoretical limit, according to our computer models – and targeting this oil accumulation to the stem of the plant, where it is more accessible than in the leaves. Our preliminary research has shown that even as the engineered plants produce more oil, they continue to produce sugar."

And it's not just biofuel startups or government-backed agencies trying to make an impact. Major airline companies including Boeing have been investing in biofuels despite backlash from other corporations.

Darrin Morgan serves director of sustainable biofuel strategy at Boeing and said he remembered a time when biofuels were considered either the savior of the planet or the "worst thing in the world."

“And of course neither of those things was true. And the answer is, well, it depends completely on how you do it and the scale and the technology and the sustainability,” Morgan said.

Why biofuels are struggling to take off with airlines

Biofuels and renewable resources have had viable growth in other transportation industries. However, even the best innovations seem to hit a snag when it comes to airplanes. A common issue stems from money, and the price gap between fossil fuels and biofuels hits the European market particularly hard.

"Biofuels are two or three times as expensive as fossil fuels."

"By far the biggest problem is the price gap—biofuels are two or three times as expensive as fossil fuels —and this needs to be compensated somehow," said Henrik Erämetsä, head of aviation regulation at Finnish oil company Neste. "We know that in the on-road sector it has been compensated by mandating the use of biofuels, so basically it’s part of the fuel price.

"But aviation is a global, international sector, where a mandate within the European Union, for instance, would distort the global business. So we need to find some other kind of solution."

Via: Associated Press via The Conversation