The RAN's AE1 disappeared in 1914. Over 103 years later, a team of researchers discovered the wreckage and can finally solve the mystery of what happened to Australia's first submarine.

Over 100 years ago, the HMAS AE1 vanished into a thick haze of fog and mist. The ship was on patrol off the coast of New Guinea, and that would be the last known location of the ship and its 35 Australian, New Zealand and British crewmen. The disappearance came shortly after the submarine signaled about the increasingly hazy conditions. And that signal was the last transmission heard from the submarine -- completely lost to the sea.

And on Thursday, just over the 103 year mark since its disappearance, the submarine was recovered.

"Australia’s first #submarine HMAS #AE1 has been found after 103 years ending Australia’s oldest naval mystery,” Marise Payne, Australia's minister of defense, said on Twitter. “Congratulations to all involved & proud that Turnbull Government could support the search. Lest We Forget."

Australia’s first #submarine HMAS #AE1 has been found after 103 years ending Australia’s oldest naval mystery.
Congratulations to all involved & proud that Turnbull Government could support the search.
Lest We Forget#ausdef pic.twitter.com/XERoSuXFLw

The government has yet to make a statement as to how or why the ship vanished. Australian officials started the search for the wreckage in 1976.

Brendan Nelson serves as the director of the Australian War Memorial. He called the discovery "one of the most significant and practically meaningful events of Australia's commemoration of the First World War."

The mystery was one that haunted the Australian forces since its disappearance. It was the nation's first submarine, and the HMAS AE1 and its sister ship the AE2 had been dispatched on a mission to capture New Guinea from German forces.

"No trace of AE1 was found, not even the telltale shimmer of escaping oil floating on the surface of the water," according to a historical account from the navy.

It continued and said, "The loss of AE1 with her entire complement of three officers and 32 sailors was the [Royal Australian Navy’s] first major tragedy and it marred an otherwise successful operation to seize the German colonies in New Guinea and the South Pacific."

For the Australian public, WWI can be seen as the deadliest and costliest conflict in their history of international involvements. As with Great Britain's other commonwealths at the time, Australia fought alongside Great Britain against Germany and Austra-Hungary and joined the war in August 1914. At the time of the war's start, the nation had less than five million people. Over 416,000 men enlisted. Of that figure, 60,000 died with an additional 156,000 wounded, gassed, or taken prisoner, according to the Australian War Museum. 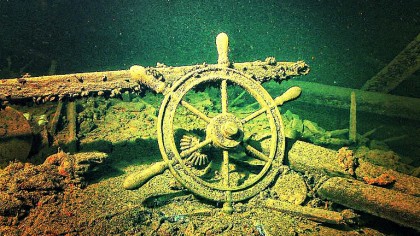 "The Great War, as it is often described, had a deep and lasting impact on our country,” Nelson said in a statement after the submarine was found. "The tragedy and loss felt by all Australians was palpable, and instances like the mysterious loss of one of our very first submarines greatly affected us. The successful location of AE1 is extremely important, and the nation should be grateful to all those involved.

"Now we can properly mourn the deaths of those men who served in AE1, and commemorate their sacrifice in a meaningful and fitting way," he added.