One of the largest observing campaigns to date has revealed that the nearest single star to the Sun hosts a massive super-Earth 3.2 times bigger than our planet.

In what has been called a breakthrough discovery, a massive exoplanet has been detected orbiting our Sun's closets single star, Barnard’s Star, just a mere 6 light-years away. The newly found planet is the second-closest known exoplanet to Earth. 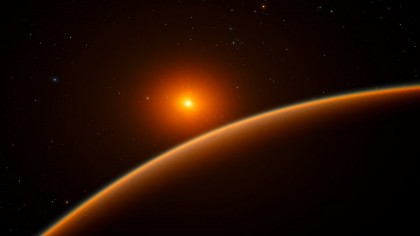 The work is the result of the Red Dots and CARMENES projects, one of the largest observing campaigns to date. The projects have been notably using data from several global telescopes, including the European Southern Observatory (ESO)'s planet-hunting HARPS instrument.

“After a very careful analysis, we are 99% confident that the planet is there,” stated the team’s lead scientist, Ignasi Ribas (Institute of Space Studies of Catalonia and the Institute of Space Sciences, CSIC in Spain). “However, we’ll continue to observe this fast-moving star to exclude possible, but improbable, natural variations of the stellar brightness which could masquerade as a planet.”

The planet has now been designated Barnard's Star b, in honor of its host star which also happens to be the fastest moving star in the night sky. Barnard's Star b now steps in as the second-closest known exoplanet to Earth and there is good reason to believe the planet may be a super-Earth.

It is, however, closer to its parent star at a distance only 0.4 times of that between Earth and the Sun. It, therefore, lies close to the snow line and researchers speculate it could have a temperature of –170 ℃.

This is very promising as current theories of planetary formation predict that the snow line is the ideal location for super-Earths to form. In addition, these exoplanets are also the most common type of objects to originate around low-mass stars such as Barnard’s Star, providing further evidence that this new discovery is indeed impressive!

The Doppler effect in effect

To find the elusive super-Earth, the astronomers made use of the Doppler effect which offers a key advantage for accurately measuring the changes in a star’s velocity due to an orbiting exoplanet. Combining it with HARPS powerful ability to detect the smallest of changes in a star’s velocity, the researchers put in effect a process called the radial velocity method which had never before been used to detect a similar super-Earth.

“We used observations from seven different instruments, spanning 20 years of measurements, making this one of the largest and most extensive datasets ever used for precise radial velocity studies.” explained Ribas. ”The combination of all data led to a total of 771 measurements — a huge amount of information!”

The breakthrough find and corresponding research were detailed in a paper published in the journal Nature.