Two babies underwent the life-changing surgery for the first time this Summer. Previously patients had to travel abroad to receive the essential surgery.

In a first in the UK, doctors have operated on two babies still in the womb to correct abnormally developed spinal cords associated with spina bifida. All babies and their mothers are recovering well from the operation.

Being able to complete the in-womb surgery in the UK greatly increases the chances for the babies to have a better quality of life compared to waiting to do surgery until after the child was born. Babies born with spina bifida complications are often unable to walk and may have to undergo several operations to drain fluid from their spine. 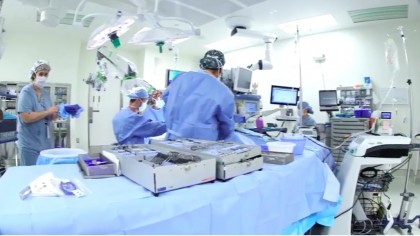 “In spina bifida, the spinal canal does not close completely in the womb, leaving the spinal cord exposed from an early stage in pregnancy. This results in changes to the brain, as well as severe permanent damage to the nerves on the lower half of the body,” said lead neurosurgeon Dominic Thompson of GOSH.

“Operating in the womb involves opening the uterus, exposing the spina bifida without delivering the baby, closing the defect and then repairing the uterus to leave the baby safely inside”, said lead fetal surgeon Jan Deprest of UCLH and Leuven. “Closure of spina bifida in the womb using this method is an alternative to postnatal surgery, and has been shown to improve short and medium-term outcomes.

While neither intervention is fully curative, in fetal surgery, the defect is closed earlier, which prevents damage to the spinal cord in the last third of pregnancy. We are also researching the minimal access (fetoscopic) technique through the GIFT-Surg Project framework and, if we can show it to have equal benefit, we will be offering this option to patients.”

The surgical team trained under supervision in Belgium, assisting in more than 40 operations before the historic surgery was attempted on UK soil. The surgical team also received support and training from the Children’s Hospital of Philadelphia which pioneered the spinal surgery in 2011.

Since the surgeries debut in Philadelphia, the surgical team has completed more than 320 similar operations. “We have been working for three years to bring this service to UK patients through the creation of a Centre for Prenatal Therapy at UCL, UCLH and GOSH," said Professor David Deprest.

Spina bifida is a birth defect where there is an incomplete closing of the backbone and membranes around the spinal cord. The condition is thought to be caused by a combination of environmental and hereditary factors. Lack of folate and uncontrolled diabetes are some possible causes. Diagnosis can happen both before and after birth.