Swarm Intelligence: How Autonomous Cars Might Need to Learn from Ants

Do driverless cars of the future need to think like ants? Swarm intelligence could be the secret to preventing traffic jams and accidents.

Autonomous cars are becoming an increasingly important feature of modern life. State-of-the-art computer technology is striving to simulate how our brains work and, if possible, improve upon them. For applications of AI in cars, there will be an increasing need to prevent congestion and accidents and generally get out of each other's way.

This may mean that driverless cars will need to work, communicate and learn collectively rather than as individual units. Researchers around the world see some promise in preventing traffic jams by learning from social insects like ants. It is called collective or swarm intelligence.

Swarm intelligence is effectively the collective behavior of any set of decentralized, self-organized systems that are natural or artificial. It is generally employed nowadays to describe work on artificial intelligence.

The term itself was introduced by Gerardo Bei and Jing WAyn in 1989 in the context of cellular robotic systems.

Swarm intelligence systems are usually made up of a population of simple agents or boids. These units will tend to interact locally with one another and within their environment. The inspiration for artificial systems comes directly from nature, as you'd imagine.

SI units will tend to follow very simple rules. Despite there being no centralized control structure that dictates how the individual units behave there appears to develop an order amongst the individuals.

The application of swarm principles to robots is called swarm robotics, while 'swarm intelligence' refers to the more general set of algorithms. 'Swarm prediction' has been used in the context of forecasting problems.

Translating it into AI

So how can this be translated into practice for autonomous cars? Cars are not the same as insects after all. They will not, for example, tell each other where there are ample sources of food.

Cars will instead, it is envisaged, 'communicate' about traffic congestion and warn against other problems. Heavily laden trucks will know when it is approaching a hill thanks to digital maps and satellite navigation. The trucks' AI will the be able to calculate that its journey will be slowed down.

This can then relay this information to other vehicles in the local vicinity and tell them to promptly overtake. The truck will also attempt to make this process as easy as possible.

Other information can also be sent electronically to cars. This could include from traffic lights that can't necessarily be 'seen' yet by the vehicle. Any information that will help autonomous cars get an 'appreciation' for the driving conditions in the future will help reduce traffic issues.

However, while logistical systems like these are being implemented, it still lacks a swarm ‘mentality’, per se.

In nature, organisms with swarm intelligence tend to be characterized by their ability to perform actions as one. Almost as if they were an integral whole with a common goal in 'mind'. Individuals striving for advantages and personal success does not compute.

Today, the vast majority of traffic problems are caused, or at the very least, made worse, by impatient or aggressive driving. Constant vying for position in traffic causes other drivers to brake abruptly which may even cause accidents. 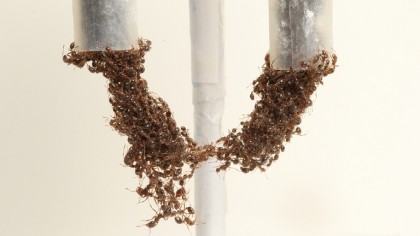 Professor Thomas Schmickl, from the Artificial Life Laboratory at the University of Graz in Austria, is one of the few scientists whose research involves robots and living creatures.

Schmickl is inspired by the communication systems of fish, fireﬂies, honey bees, cockroaches and slime molds.

Schmickl's team focuses on self-regulation rather than intensive learning for their robots. Their autonomous underwater robots and a small car he uses achieve ‘smart’ final configurations more or less automatically.

AI should learn from nature

The learning curve required can’t be passed successfully, or safely, in real traffic but can be overcome in the lab.

Schmickl's work is part of the Collective Cognitive Robots (CoCoRo) project, which is funded by the EU.

Schmickl is researching how autonomous units can find their way around like ants. Phosphorescent dye on the ground serves as a substitute for the scent trails ants use in nature.

At the German Research Centre for Artificial Intelligence (DFKI) researchers are also trying to avoid the exclusive use of deep-learning for AI vehicles.

A good example would be an autonomous car at a carnival. What should it do if it suddenly encounters an elephant? Not hit it obviously, but hard brake or swerve? Which way?

Humans are superior to technology here, at least for now. We are continuously aware of the space and time around us and relate this to our current situation.

“The world is becoming a universal sensor”

Joseph sees a future where a combination of IoT, smart cities, and AI is the norm.

“The world is becoming a universal sensor”, explains Reger, “because AI gains new and previously concealed information independently from existing sensors and cameras. Most of this is already technically feasible today.”

AI is still very much in its infancy development and it will continue to include many disciplines. It is likely not out of the question that psychology, neurology and neurosciences, mathematics and logic, communication science, philosophy, and linguistics will all eventually come together.

And, of course, engineers will need to be included to put the parts together.

So will smarm intelligence mean that autonomous cars might need to learn from ants? To the extent that smart devices are becoming ever more interconnected it is only a matter of time. Though don't expect autonomous cars to be building bridges from their own 'bodies' or chopping up and carrying away trees anytime soon.