The electrified road is first of its kind to enable recharging of vehicles while driving, helping to create a future of fossil-free transport.

Sweden has built the first electrified road that can charge an electric vehicle as it rides on the road. The road uses a method called conductive charging, and the charge is supplied to the vehicle using conductive rails.

It is made possible by embedding conductors on the road. When the vehicle is in motion, electrical energy is transferred to the battery by the conductors that join the vehicle to the rail.

If the vehicle is not in motion, then the current supply disconnects automatically. This technology eliminates the need for roadside charging ports, and now the vehicles can be equipped with smaller batteries, thus saving both weight and cost.

There is no risk of electrocution if someone steps on the rail, as the electricity is actually carried under the rail (inside the road). The conductor actually goes into the rail to make contact with the embedded conductors. Grooves are cut along the rails to facilitate such a setup.

“There is no electricity on the surface. There are two tracks, just like an outlet in the wall. Five or 6 centimeters [2 or 2.4 inches] down is where the electricity is,” said Hans Säll, Chief Executive at eRoadArlanda. “But if you flood the road with salt water then we have found that the electricity level at the surface is just one volt. You could walk on it barefoot.”

When the overall cost and investment are taken into account, this system actually proves to be much efficient and cost-effective than conventional gas-powered vehicles.

“Electrifying 20,000 kilometers [12,427 miles] of roads in Sweden with conductive feeds is expected to cost about SEK 80 billion [$9.5 billion]”, the company said. “If we assume that electric cars with small batteries cost the same as internal-combustion cars, it would take less than three years to pay for the electrification of the roads.” 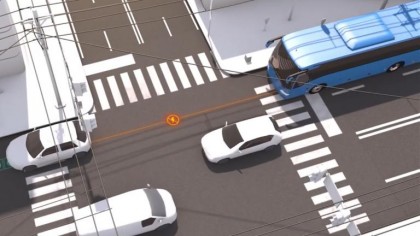 Emissions will also see a huge dip as this method produces 90% less emission compared to fossil fuel powered alternatives. The project is in line with the Swedish government’s mission to develop a fossil-free transport infrastructure by 2030.

Currently, 2 kilometers of the road has been electrified outside of Stockholm. This stretch of road will act as the proving ground for this technology for the coming two years, as the engineers will test its performance under varying conditions.

The company has big plans for the future as they aim to spread the technology to more roads in Sweden.