If you've ever lived in a student house you'll know how much of a nightmare the dishes can be in the absence of a dishwasher. One Swedish student decided to use his skills and tackle this problem with the use of some old school engineering principles teamed with the modern usage of 3D printing to create an 'automatic' dishwasher. 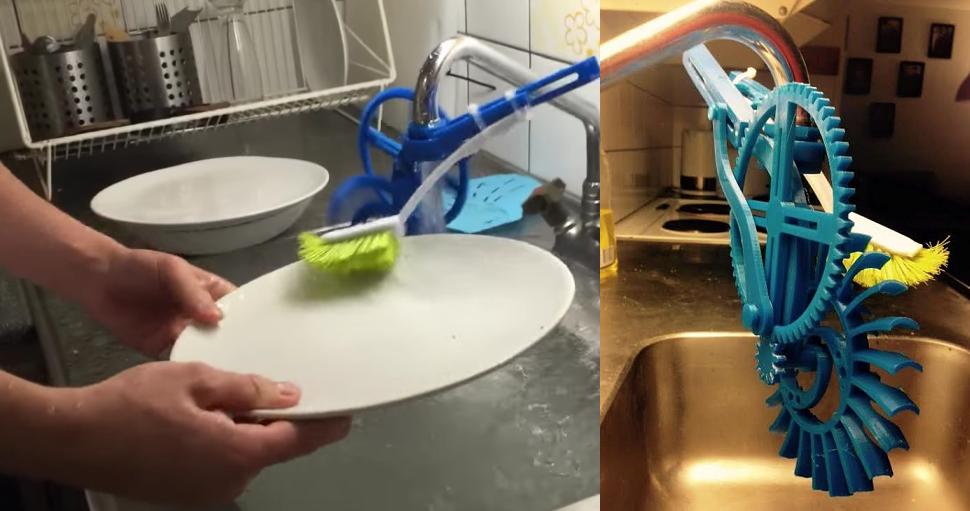 22-year-old Swedish engineering student Filip Sjöö used his CAD skills in Solidworks 3D and a little knowledge on 3D printing plastics to create a cogged device that relies on the flow of water from your tap for energy. When was the last time you saw a water wheel!? The rotating motion is converted into linear motion using a system much like the one you'd find driving old train wheels. Then comes the dishwasher part; on the end of the device is a scrubbing brush to automatically wipe your dishes clean.

It's a great example of using traditional engineering principles in a modern way. It's also a great example of resourcefulness in terms of powering the device. Most people who obtain a 3D printer would experiment with simple 3D models, maybe of their favourite action hero, but not Sjöö.

“I got my 3D-printer for Christmas,” he tells 3DPrint.com. “It’s a Prusa i3, and it’s probably the best Christmas gift ever.”

Some original ideas such as an internal water turbine just weren't meant to be but he managed to nail down a final design. He custom designed a thread to fit his tap after finding a lack of readily available cad models online.

“The maximum angle you can print without supports is approximately 45 degrees,” Sjöö explains. “Because of this, I had to make a custom design. I was not sure that I would succeed in printing functional threads, as the pitch was only 1 mm, but surprisingly it worked very well after some failiures.”

After some failed prototype parts he finally got the brush to move roughly to his target of 1 stroke per second. Alright it's not going to be going viral in student houses anytime soon but you gotta hand it to him; he never intended for it to be more than a “funny little project that [he] had to do.”