The police force in Basel has decided to replace their diesel cars with all-electric Model X 100D SUVs Teslas due to lower costs for operation and maintenance and to help fight against drones.

The police in the Swiss city of Basel decided to exchange their diesel cars with electric Model X 100D SUVs Teslas. The reason, according to officials, was largely to save money and cut departmental costs.

Tesla cars have been becoming popular with police forces all over the world. In the US, the Los Angeles Police Department and the Denver Police Department have both started using Model S sedans as part of their fleets. 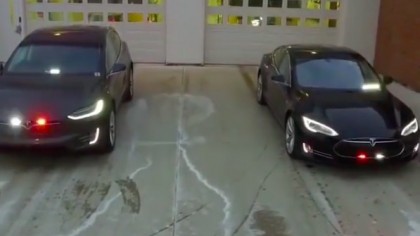 In the UK, Scotland Yard is considering Teslas. In Luxembourg, the police have converted two Model S sedans to patrol cars. In Canada, the Ontario Police have gotten a brand new Model X. However Tesla’s vehicles still remain quite expensive for police use. The Basel police, will be spending around 1 million Swiss Francs, which makes 150,000 Francs a piece for each car. This is about 50,000 Francs more than the current diesel models.

“The cantonal police of Basel-Stadt will replace the diesel vehicles for the alarm labels with electric Tesla Model X-100D which satisfies both economical and environmental protection, due to high payload and plenty of storage space, as well as very good handling characteristics for use as an alarm pickup vehicle.

"The total cost of ownership (TCO) is lower, despite higher initial cost compared to today’s cars. The planned replacement of diesel combined vehicles with the Tesla Model X-100D brings several advantages in terms of economic efficiency, practicality and ecology.

"In view of the exemplary role of the administration aimed at environmental protection in the Cantonal Legislative Plan 2017-21, the cantonal police has clarified whether a fully electric vehicle is available and suitable for the alarm signal on the market. A thorough investigation and practical tests have shown that the Tesla X-100D meets the requirements."

Martin Schütz, a spokesman for the cantonal police of Basel-Stadt said the alarm pick-up vehicle would cost 91,000 Swiss Francs.

There is an additional cost of 49,000 Francs with the Teslas but these would be offset by the significantly lower costs for operation and maintenance, and a higher value for resale. One of the concerns is also practicality.

“A vehicle that is suitable for an alarm needs, on the one hand a sufficient payload and plenty of storage space due to the equipment of the police officers. Ideally, the vehicle also has four-wheel drive. This would also include the environmental ideals which would make the administration role models.” Schütz said.

Basel cruisers have to do about 200 kilometers or 124 miles per day and the official EPA of a Model X 100 is almost 300 miles. There will be two charging stations each at the police stations Kannenfeld and Clara as well as in the arsenal.

The Swiss police are also becoming prepared for future challenges, such as in the fight against drones with this new purchase, according to experts. The vehicle can also be digitally upgraded in the future.

"Even with a simple traffic accident, the on-board computer will make it much easier to record the data. And also not to forget: the Basel police can refuel the new emergency vehicles in future at the fast charging stations of Tesla. However, the nearest Supercharger is currently in Pratteln," said Theo Karafantis of BZBasel.

Man Blows Up Tesla to Not Pay $22,600 to Replace the Battery