A new programming language called CRN++ has been developed for use in synthetic biology applications.

Synthetic biology is a new area of interdisciplinary research that involves the application of engineering principles to biology. The field aims to (re-)design biological components and systems that do not already exist in the natural world.

It has the potential to impact a number of other fields such as biology, nanofabrication, and medicine. One big challenge for the discipline is that of ‘embedding computation in molecular contexts, in situations where electronic micro-controllers cannot be inserted.’

The solution lies in the development of ways that can represent computations using molecular components. Researchers from the The University of Texas at Austin have offered a solution by creating CRN++, a new language for programming deterministic (mass-action) chemical kinetics in performing computations. 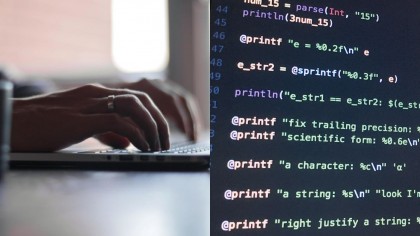 The research team's work has been pre-published on arXiv. In the paper, they go into detail about the new language and build a compiler that translates CRN++ programs into chemical reactions. "A key technical challenge of synthetic biology is to design a chemical controller that interacts within a cellular environment, achieving a particular task," Marko Vasic, one of the researchers who carried out the study, told.

"To achieve this, it is necessary to both engineer synthetic molecules and program them. Molecules interact via chemical reactions, and by programming molecules, we mean defining interaction rules (chemical reactions) between them."

While there have been exciting developments in DNA synthesis that have opened doors for molecule engineering. Researchers must first create ways to design the interaction rules (chemical reactions) to achieve a desired goal.

The aim of creating the CRN++ language was to develop a way to express the behavior of chemical reactions in a more intuitive way. The language's development team explain that CRN++ is based on two ideas: modularity and the use of an oscillator.

"To the best of our knowledge, we are the first to provide an imperative programming language that complies with chemical reaction networks," Vasic said. "We open-sourced our code, including CRN++, as well as simulation framework, as we hope that this will make it easier for researchers to try out new approaches, and thus advance the area further."

The new language will likely help scientists working in the field of synthetic biology to achieve some of the field's broad aims including creating a catalog of standardized biological parts that can be used and synthesized quickly to build novel biological systems. As well as work in the field of applied protein design which looks to ‘redesign existing biological parts and expand the set of natural protein functions for new processes.’