Take A Look Inside the World's Most Expensive RV

This luxury RV from Austrian company Marchi Mobile is full of all the bells and whistles you'd expect in a million dollar vehicle.

Would you pay $3 million for an RV? That’s the asking price of the EleMMent Palazzo Superior from Austrian company Marchi Mobile.

The 45-foot long caravan is being called a “mobile mansion” since it's equipped with two stories of a master bedroom with a king-size bed, a lounge area, and a fully outfitted kitchenette.

For optimum comfort, an air convection system maintains the interior temperature along with a continuous air circulation system that claims to “ensure the best air quality at all times.”

In the lounge area, there is a 13-foot wide automatically extendable lounge sofa with bar furniture, a TV, a drinks refrigerator, wine cabinet and coffee machine.

There’s also a passageway leading to the carbon fiber cockpit which features MMI control instrumentation inspired by aviation consoles, with rotating leather chairs and a panoramic windshield that resembles something out of a spaceship. It’s all powered by a Volvo 6 cylinder in-line engine and built on a Volvo chassis, making repairs on the go, very easy. 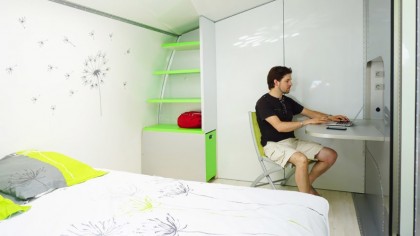 This Super Caravan is Powered by the Sun and Wind

“The Palazzo’s sweeping lines, a heroic attempt at making a brick appear aerodynamic, were originally penned by Luigi Colani, the irascible eighty-something father of so-called biodynamic industrial design, whose organically bulbous aesthetic has been channeled into vehicles for Fiat, Alfa Romeo and BMW,” writes the BBC in a review.

One distinctive element of the most expensive RV on earth is the Sky Lounge, which has an automatic lift system that raises a walled-in roof deck with integrated porch furniture, floor heating, and an exterior stairwell – it’s a bit like taking a garish European nightclub with you on a road trip.

The master bedroom is anything but ordinary, with a palatial bed made by the same bed makers as Buckingham Palace. The wooden headboard is something out of Versailles, with its intricate filigree design and tufted wall. There is also a dressing table with a large, luxurious mirror and plenty of storage space for clothing and other accessories. The bathroom even has a rain shower with rose gold fittings.

With 732st of space, there is more than enough room for guests. They can make themselves comfortable in the large living area which doubles as a sleeping space. There’s also a weatherproofed speaker system for even more entertainment.

When it was first released in 2014, Marchi Mobile was primarily offering up this opulent vehicle to the Dubai market, but since then it has made the rounds worldwide for anyone willing to pay up for a very pricey staycation.

The company was founded by former trucking magnate Mario Marchi. They make far more beyond luxury RVs, using a similar platform to their RV, they also offer a mobile health clinic and a stunning cab design for semi-trucks that will make those long hauls a breeze. Marchi also launched a multi-passenger van as a part of their new Viva line. In summation, it can be assumed that the kind of consumers Marchi is aiming for with these designs are of the Beyoncé caliber.

Via: BBC, Marchi Mobile, The Insider