Cycling is a great method of travelling that is not only good for the environment but also helps towards keeping you fit. However, many people in London are put off from cycling due to the traffic congestion but they may interested in the plans of Hugh Broughton Architects and Arup.  Together they make up the River Cycleway Consortium and they want to build a cycle path that would float on the River Thames at a cost of around £600 million. 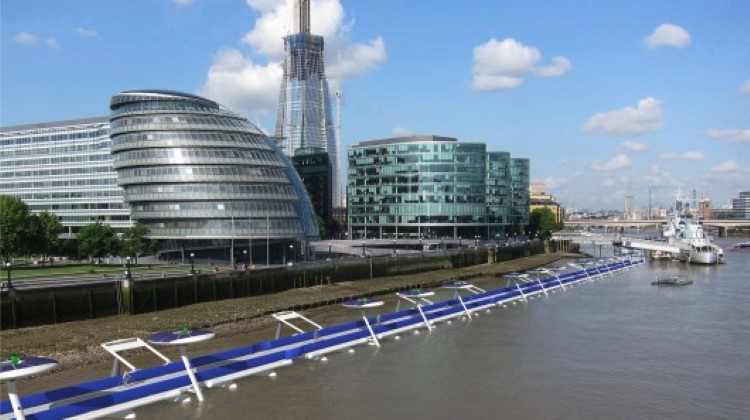 If the plans were to go ahead the Thames Deckway would cover 7.45 miles, starting at Battersea and ending at Canary Wharf. The cycle path would be close to the edge of the river so that cyclists would not be in harm’s way from the other traffic on the Thames. The pathway would be designed to float and so it would rise and fall with the natural tide of the Thames. There would be plenty of access ramps going up and down to the embankment which would be situated at key points along the route of the pathway.

The River Cycleway Consortium said that the cycle path would allow a cyclist that was fairly fit to complete it in about 30 minutes. The single journey would have a price tag of around £1.50 and refreshment kiosks would be situated at various stopping points. Families could rent bicycles which come with infant carriages.

The designers of the cycle path said that traffic flow along with river motion and other data would be monitored by satellite, while power needed would come from the wind, tide and sun.

At the moment, the consortium is looking to raise funds so that a feasibility study can take place and if this goes well, they will seek private investments. It has been said that the Thames Deckway could be in force in just two years from having been given the go-ahead.