Scientists are equipping swarms of locust with technology that will allow them to sense and detect bombs. Backed by the U.S. Navy, the research is taking place at Washington University in St. Louis. Biomedical professor Baranidharan Raman is trying to use to fine-tuned olfactory receptors in locusts to create an artificial nose that can detect explosives. So, in the future, when you see a swarm of locusts flying towards you, it's not another plague, just the bomb squad trying to find explosives.

The research has received a US$750,000 grant for three years of research from the Office of Naval Research. Utilizing the biological sense of smell present in locusts allows for a more precise sensor for detecting explosives. Professor Raman has been studying locust's sense of smell for many years now, reaching some rather interesting conclusions. He has determined that locusts are able to identify a particular odor, even in the presence of an array of other smells, according to Engadget. Engineers are able to utilize this ability through training the locust to react in certain ways to a particular sense of smell, explosives, for example. 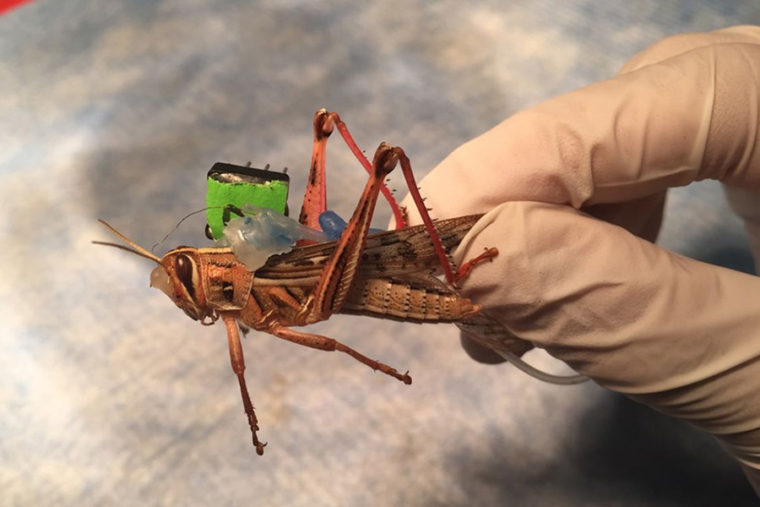 “Why reinvent the wheel? Why not take advantage of the biological solution?” ~ Raman

The goal of the project is not to design a completely new system, but rather effectively capture the abilities of the locust into a 'cyborg' style system. By attaching a small sensor to the locust's wings, the engineers are able to monitor the neural activity of the locust and pinpoint when it senses a particular smell, according to Popular Science.

“We expect this work to develop and demonstrate a proof-of-concept, hybrid locust-based, chemical-sensing approach for explosive detection.” ~ Raman

To further implement their detection techniques, the locust's wings will be tattooed with plasmonic silk-based tattoos which generate heat. This heat will be controlled remotely and will be used to control the locusts movements, directing them to a particular location. In addition to controlling the locusts, these tattoos will also collect samples of explosive material in the area to allow for further analysis.

The bomb squad of the future could look a lot more like a swarm of locusts, and that is awesome, and kind of disgusting.