Artificial Intelligence is a highly polarizing technology due to its powerful and even scary potential.

What do you think about artificial intelligence? Will AI help usher in a new age in human innovation? Or will AI bring on the destruction of humanity? Artificial Intelligence has become one of the most polarizing technologies of the past 50 years, debated among researchers, CEOs, and even in our movies. However, are these concerns worth it? Today we are going to explore both sides of the argument and look at what some of the world’s top leaders think about intelligent machines.

Now, artificial intelligence is one of the most talked-about topics across the technology world and even in pop culture. Some of the best films to come out in the past decade have tackled the coming ethical and philosophical challenges of artificial intelligence. While most business leaders feel AI will have some form of impact on their businesses very soon. In a report put together by Inc., about ⅓ of business leaders believe AI is among the technologies that will have the greatest impact on their companies, and they have good reason to believe this. 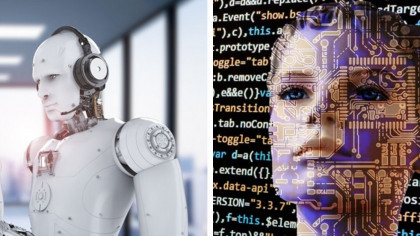 AI disruption is already here. In a study conducted by Gartner Research, researchers found that 37% of organizations have implemented AI in some form. While 80% of emerging technologies will have AI foundations. Even more so, the IDC has stated that “Artificial intelligence has come into the mainstream because it allows us to make sense of an increasingly large amount of data in real-time. Indeed, worldwide data will grow 61% to 175 zettabytes by 2025.”

There are three basic levels of AI

In short, Narrow AI is not conscious, sentient, or driven by emotion. Narrow AI operates within a predetermined, predefined range of parameters. Nevertheless, this form of AI is still extremely useful and can be used to do everything from creating art to identifying cancer in people. A majority of people have little to no fear of Narrow AI.

Are you for AI or are you against AI?

Secondly, let’s look at some of the general arguments for and against artificial intelligence. Whether for the better or worse smart machines are going to affect every facet of our lives. Most of the arguments pro artificial intelligence centers around the business world and using AI to augment other emerging trends across multiple industries. AI will be able to optimize logistics, provide accurate translations, usher in a new age in autonomous vehicles, and even help us create better art.

Artificial intelligence will impact industries like healthcare, offering a better diagnosis of diseases, more precise surgeries, or even streamlined, virtual nursing assistants used to monitor patients. The way we manufacture and ship goods are set to change. While the emergence of the smart city will be on the foundations of artificial intelligence technology.

Artificial Intelligence will create new jobs. Though the counter-argument is that AI machines eventually will disrupt the global workforce. Some researchers believe that job loss in the market will only be temporary and will eventually lead to the creation of countless new jobs across the world, recentering the global economy.

Artificial Intelligence will protect us. The counter-argument for this is that AI in the wrong hands or on its own can be highly destructive if not properly trained. Yet, AI is a double-edged sword. Artificial intelligence can be used to protect us both in the real world and online, securing everything from financial transactions, to your personal information. The world of intelligent offline and online security systems is not too far away. It is already starting.

Artificial Intelligence could help us better protect our environment and fight climate change. As mentioned, AI's biggest superpower is its ability to look at massive amounts of information in real-time and use it to make “intelligent” split-second decisions. AI is currently being used to analyze and track changes in the environment and even monitor biodiversity. AI could also be used to help companies and homes better monitor energy usage. Google’s DeepMind helped the company reduce its data energy usage by 40%.

These arguments are only the tip of the iceberg. There are still many unanswered questions surrounding artificial intelligence. How will machines affect our behavior and interaction? How can we guard against mistakes? How do we eliminate AI bias? How do we protect ourselves from the unintended consequences of AI?

What do leaders have to say?

Key Quote: “I have exposure to the most cutting edge AI, and I think people should be concerned by it.”

Tesla's founder has been very vocal about artificial intelligence over the years. For the record, Musk fully embraces Narrow AI as his company Tesla, utilizes weak AI for its vehicles’ self-driving features, which will eventually make Tesla cars fully autonomous.

OpenAI should be more open imo

However, everything else beyond narrow, has the business mogul worried. Elon Musk has gone on to state that AI is a greater threat to the world than North Korea with the “competition for AI superiority” most likely to cause World War III. As for AI itself, Elon feels that if humans do not create AI responsibility, it is a serious risk to the human species.

“AI is a fundamental risk to the existence of human civilization in a way that car accidents, airplane crashes, faulty drugs or bad food were not — they were harmful to a set of individuals within society, of course, but they were not harmful to society as a whole”, said Musk at the National Governors Association. At the moment Elon Musk is working hard to combat coming to AI with his nonprofit Open AI and is planning to link the human mind to computers at his company Neuralink.

Key Quote: "I think that AI is going to unlock a huge amount of positive things, whether that's helping to identify and cure diseases, to help cars drive more safely, to help keep our communities safe.”

As a direct response to Elon Musk, Zuckerberg has taken a different approach to AI, taking a more positive outlook on the overall future. At the 2018 Viva Technology conference in Paris, the Facebook founder expressed an overall optimistic outlook on artificial intelligence. Though he agrees with Musk, that we should be very careful with AI, Zuckerberg believes that technology has the power to make our world and communities much safer. His overarching message is that being too negative toward AI could be counterproductive.

"We need to make sure that we don't get too negative on this stuff. Because it's too easy for people to point to an individual failure of technology and try to use that as an argument to slow down progress."

The former Google CEO also disagrees with Musk’s dystopian outlook. In an op-ed for Fortune Magazine, Schmidt described all the fantastic benefits of artificial intelligence and its potential to make humanity better, ideas echoed earlier in this article. Directly responding to Musk, Schmidt has said “He doesn’t understand the benefits that this technology will provide to making every human being smarter. The fact of the matter is that AI and machine learning are so fundamentally good for humanity. As [these new solutions] emerge, they will benefit all of us, and I mean the people who think they’re in trouble, too.”

Key Quote: "I would argue that perhaps the most productive debate we can have isn’t one of good versus evil: The debate should be about the values instilled in the people and institutions creating this technology."

“Ultimately, humans and machines will work together—not against one another. Computers may win at games, but imagine what’s possible when humans and machines work together to solve society’s greatest challenges like beating disease, ignorance, and poverty. Doing so, however, requires a bold and ambitious approach that goes beyond anything that can be achieved through incremental improvements to current technology. Now is the time for greater coordination and collaboration on AI”

Nevertheless, the Microsoft CEO does outline some clear guidelines needed when creating artificial Intelligence. Some of these guidelines include, AI must maximize efficiencies without destroying the dignity of people, AI must be designed for intelligent privacy, AI must have algorithmic accountability so that humans can undo unintended harm, and AI must guard against bias, ensuring proper, and representative research so that the wrong heuristics cannot be used to discriminate.

Key Quote: "The development of full artificial intelligence could spell the end of the human race….It would take off on its own, and re-design itself at an ever-increasing rate. Humans, who are limited by slow biological evolution, couldn’t compete and would be superseded.”

Before his passing, the influential Stephen Hawking made it very clear that humans should tread softly in the advancements of artificial intelligence. His central concern is AI matching or exceeding our intelligence is dangerous, as there is no way to truly know what would happen if that occurs in the coming years. Similar to Musk, Hawking wants us to be “mindful” of the dangers of AI.

“The genie is out of the bottle. We need to move forward on artificial intelligence development but we also need to be mindful of its very real dangers. I fear that AI may replace humans altogether. If people design computer viruses, someone will design AI that replicates itself. This will be a new form of life that will outperform humans,” says Hawking

Though Bezos has clearly expressed his excitement regarding artificial intelligence and its ability to change the way we shop and interact with our favorite products; the inevitable creation of weapons that operate autonomously is scary for Bezos. He has expressed his fears at the George W. Bush Presidential Center’s Forum on Leadership in April of 2018. Yet Bezos thinks the idea that we might have some AI overlord is a bit overhyped. “The idea that there is going to be a general AI overlord that subjugates us or kills us all, I think, is not something to worry about. ..I think it is unlikely that such a thing’s first instincts would be to exterminate us. That would seem surprising to me”, says Bezos.

What do you think about Artificial Intelligence? Will it be the end of mankind? Or, could it work alongside humans to solve some of our biggest challenges.

Become the Ultimate Artificial Intelligence Scientist with This Bundle