A month ago, SpaceX made headlines again after successfully launching their first reused spacecraft - the Dragon - on a mission to resupply the ISS for the second time.

The Dragon was launched into low-Earth orbit aboard SpaceX's Falcon 9 rocket on June 2. It prompted the 11th successful Commercial Resupply Services mission (CRS-11) to the International Space Station (ISS).

The spacecraft will help astronauts test a new set of solar panels as well as investigate the effects of space on the heart. After a few days of spaceflight, the Dragon capsule successfully docked at the ISS. NASA astronauts Jack Fischer and Peggy Whitson captured the capsule using the space station's robotic arm. 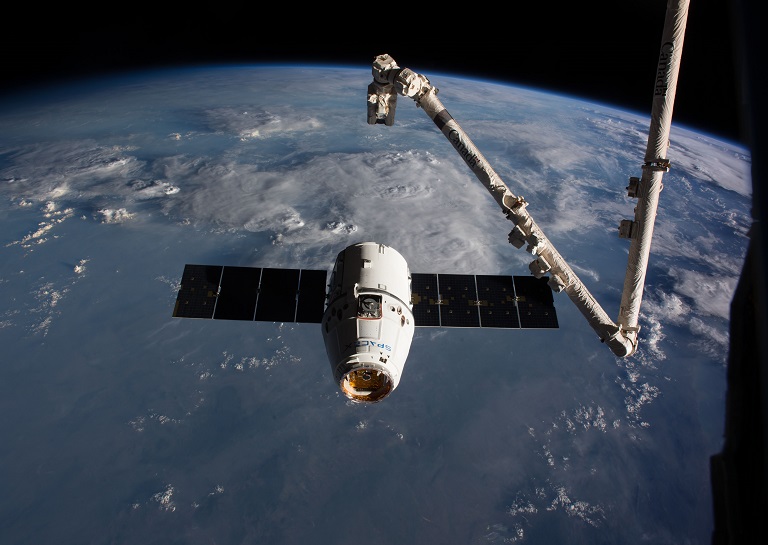 SpaceX's Dragon cargo craft about to be captured by the Canadarm [Image Source: NASA Johnson/Flickr]

On board the Dragon was almost 6,000 pounds of payload. It includes critical supplies and materials that will be used to support the ISS crew and the dozens of experiments they will perform.

The Dragon is also the first commercial spacecraft to deliver cargo to the space station. Previously, in 2014, the capsule delivered nearly two-and-a-half tons of supplies and scientific payloads to the ISS.

Now, the spacecraft has successfully completed another resupply mission.

Earlier this week, SpaceX's Dragon spacecraft made a triumphant return back to Earth.

Early Monday morning, the Dragon capsule detached from the ISS before embarking on the journey back home. Over the course of several hours, the spacecraft slowed its orbit to begin its final descent. Once back in the Earth's atmosphere, the capsule successfully deployed its parachute before it came crashing down into the Pacific Ocean at approximately 8:14 AM EDT.

However, if it were not for the incredible technology protecting the spacecraft, it would have never made its second flight to begin with.

Protecting the Dragon with the PICA-X Heat Shield

The Dragon's PICA-X heat shield protects the spacecraft from temperatures exceeding 1500-degrees Celsius. It is a special variant of the Phenolic Impregnated Carbon Ablator (PICA) heat shield invented by NASA.

The PICA heat shield was derived from a previous NASA mission in the 1990s. Scientists wanted a new spacecraft that would investigate and retrieve samples of commentary matter for research back on Earth.

The spacecraft, deemed Stardust, would investigate the relatively unchanged comets to further our scientific understanding of the early days of the universe.

Stardust would investigate the comet Wild 2 and would return after a nearly 6 billion kilometer journey. Although, to bring Stardust home, NASA needed new an innovative technology that could withstand reentry into the atmosphere at a record breaking speed.

The problem was the spacecraft was to return to Earth at a record-breaking speed. Most materials were unworthy, and the ones that could withstand the force were simply too heavy.

"Stardust would be returning to Earth faster than any manmade object before it, plunging into the atmosphere at speeds of 28,600 mph. Heat shields used in previous NASA missions were simply incapable of withstanding the blast of heat Stardust would create upon its return. Agency engineers looked at materials the Department of Defense had developed, but while durable enough they were too heavy" explains NASA.

"Developed at Ames Research Center in Northern California, the PICA heat shield weighs one-fifth as much as its conventional counterparts and can withstand temperatures up to 2800° C," explains NASA.

Gaining the Attention of SpaceX

Nearly a decade after the development of PICA, Elon Musk's space company SpaceX began to emerge in the early 2000s.

In 2006, NASA put out a competition for private companies to devise a space capsule capable of resupplying the ISS. Naturally, the Dragon design won.

Intrigued by the successful reentry of the Stardust, SpaceX engineers decided the material would be suitable for a spacecraft of their own: the Dragon.

Now with NASA on their side, SpaceX began to shape the PICA heat shield to the Dragon spacecraft. Unfortunately, the shield could not be manufactured in a singular piece large enough to accommodate the much larger Dragon capsule. It was up to the clever engineers at SpaceX and NASA to come up with an alternative solution.

"Stardust’s Sample Return Capsule only required a PICA shield that was a little over 1 meter in diameter; to protect the much bulkier Dragon a 4-meter version was needed. With the 1-meter shield, Rasky and his team worked with Fiber Materials Incorporated to fabricate a single piece of PICA, but that wouldn’t be possible with the larger Dragon cargo transporter. To solve that problem they devised an efficient and cost-effective method for manufacturing smaller PICA tiles, which were then fabricated into a single heat shield," says NASA on a technology spin-off paper.

Hence, PICA-X was born. Now, with a shield durable to survive the forces of reentry, SpaceX was close to realizing their new mission: resupplying the ISS.

The PICA-X shield proved to be incredibly durable, capable of protecting the capsule from nearly all damage during reentry. As such, SpaceX would go on to reuse their spacecraft in June of 2017.

Although the PICA-X shield is a remarkable piece of engineering, it is not the only intriguing feature of the Dragon capsule.

Inside the Dragon Spacecraft

The Dragon spacecraft maintains the unique ability to be arranged in multiple configurations, depending on the intended use. It can be converted to carry cargo, humans, or turned into the "DragonLab." The configurations enable the craft to be optimized for a variety of scenarios. The duality of the ship makes it ideal for many space-bound missions expected to continue into the future.

In the cargo configuration, the space inside the capsule is lined with carbon-aluminum honeycomb racks. The racks can accommodate many standard-size NASA cargo bags. It also retains the ability to carry freezers, enabling the craft to carry temperature sensitive materials including biological samples. 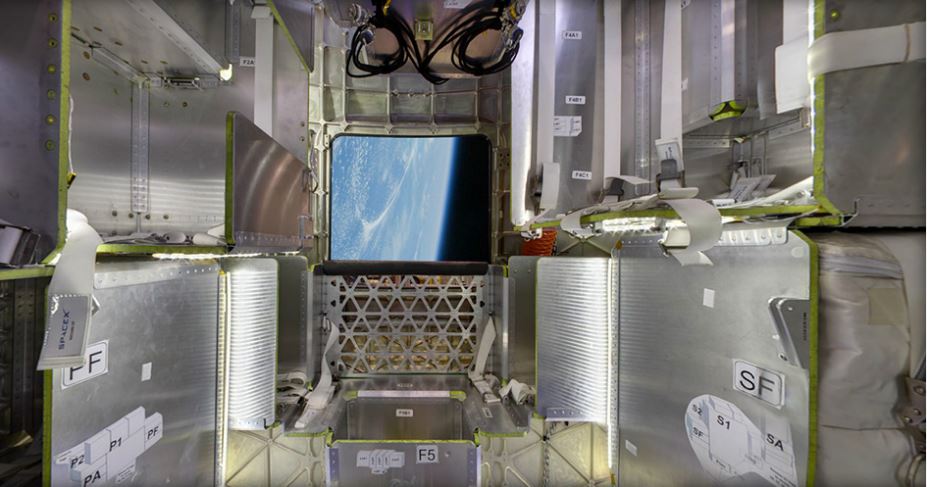 Though humans have yet to fly inside the Dragon, SpaceX is currently in the works of planning a manned mission.

"Under an agreement with NASA, SpaceX is making upgrades to Dragon to allow for crew carrying capability," explains SpaceX.

The engineers behind the Dragon claim it will be the world’s safest and most reliable crew transport vehicle ever constructed. The capsule will be able to support a crew of seven along with life support systems, backup manual control systems, and an impressive power launch escape system.

SpaceX expects to make its first manned mission as early as 2018. 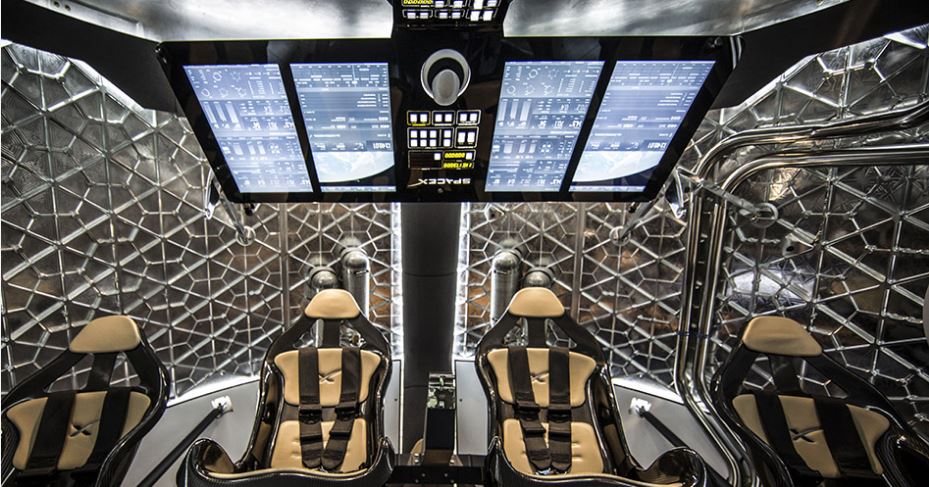 To continue the pursuit of the answers of the universe, SpaceX is ensuring the Dragon will be able to support the world's most advanced technologies. The DragonLab gives a suitable platform for experiments to be carried out in a microgravity environment. Independent of the space station, the DragonLab will be able to carry out more risky experiments without compromising the multi-billion dollar ISS. 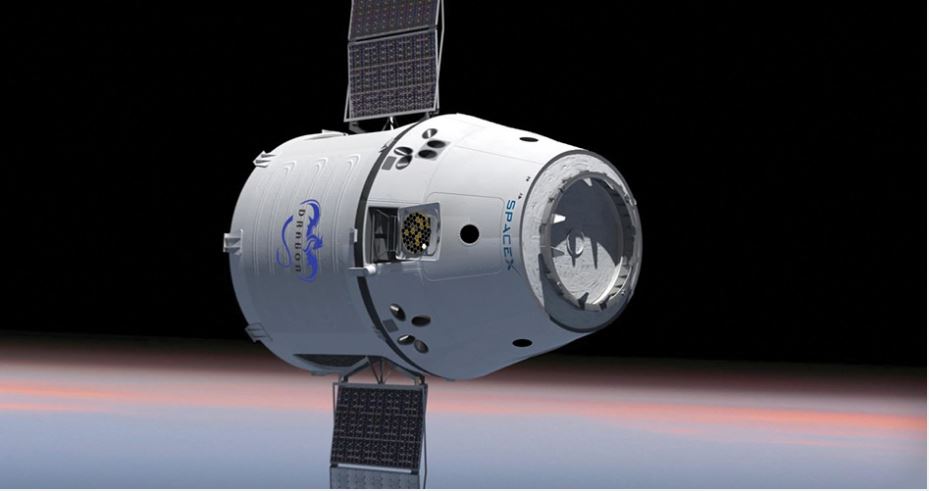 Inside the Pressured Section

The Dragon is portioned off into three separate sections. The pressurized section, commonly referred to as the capsule, is engineered to carry humans or cargo into space. Outside of the capsule is lined with the Dragon's advanced PICA-X heat shield designed to protect equipment and crew from the intense heat experienced during reentry. 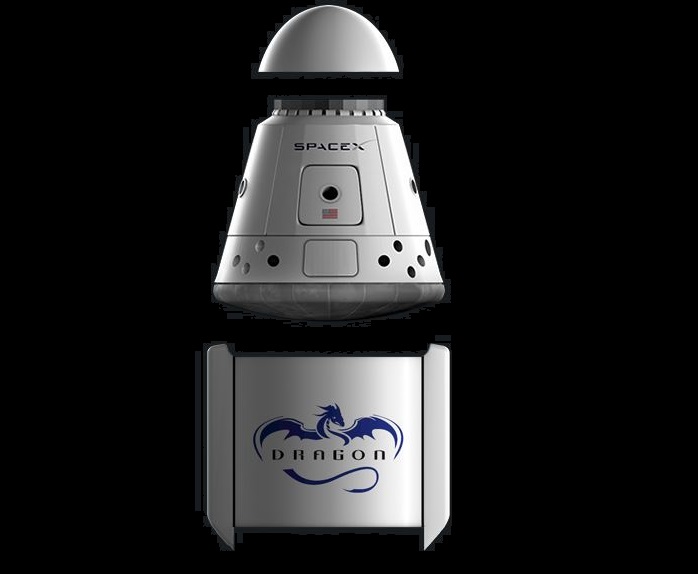 The trunk of the spacecraft remains unpressurized. It houses cargo and the Dragon's solar arrays that are not required to be housed in a temperature and pressure controlled environment. The capsule remains attached to the dragon until moments before reentry where it is jettisoned. Together with the capsule, the Dragon spacecraft has a total launch payload volume of 25 cubic meters (almost 900 cubic feet). In just one mission, it can carry up to 6,000 kg (13,228 lbs) of cargo.

Part of the material flying within the Dargon's pressurized area includes an experiment containing fruit flies. Fruit flies' short lifespan compounded by their relatively small size, short lifespan, and well-known genetic makeup makes them ideal candidates for heart function studies. Scientists will use the flies to investigate the effects on the heart of prolonged exposure to microgravity.

"This experiment could significantly advance understanding of how spaceflight affects the cardiovascular system and could aid in the development of countermeasures to help astronauts." Claims Nasa.

Other technologies housed inside the Dragon's unpressurized area include a new type of solar panel, called the ROSA. The panels unfurl from a compact, folded state, enabling the technology to be packed in a significantly smaller area.

"ROSA has the potential to replace solar arrays on future satellites, making them more compact and lighter weight. Satellite radio and television, weather forecasting, GPS and other services used on Earth would all benefit from high-performance solar arrays," NASA explains on their mission page.

In January of 2016, NASA made the official announcement that SpaceX was selected to carry out missions to the ISS using the Falcon 9 launch vehicle along with the Dragon spacecraft. The company is now under contract until 2024 to carry out up to 20 resupply missions.

Elon Musk's space company will continue to fly missions to the ISS for the next seven years. However, the company envisions traveling far beyond the reaches of low-Earth orbit.

SpaceX is currently in the works of designing a manned craft that will support missions into deep space. Although it remains uncertain where they will go first, SpaceX seems determined to reach Mars.

Though the space race has been ongoing for half a century, it has merely just begun. Technologies are rapidly evolving, enabling humans to reach farther into the depths of space. It is only a matter of time before humans reach Mars and beyond.