The Tectron E4 is an on-road and off-road electric kart that is pretty compact and comes at an affordable price. It is the brainchild of Carlos Diaz from Santiago in Spain.

"I was walking through the forest one day when a group of foreign tourists rode past me on their mountain bikes. I wondered then what might happen if one of them got injured, as he would be unable to join his friends in their next rides and their vacation would probably be over," says Diago, explaining the inspiration for his project. "It was then when I started to imagine a four Wheel prototype; flexible (agile), strong and electric."

He then hit the drawing board and started coming up with some ideas with a few goals in mind. For example, he wanted the kart to be able to handle the bumps and jumps that a mountain bike can so that the rider can tag along with their mountain biking friends.

He took a lot of inspiration from mountain bikes, installing a front braking system incase hard breaking is needed. There is also a suspension system at the rear and front of the kart: "I pictured a MacPherson front suspension system that would be adjustable for convergence, divergence, height, and shock stiffness. And a gas monoshock at the rear."

The current prototype has a range of 20 and 23 km in a straight line at around 18 km/h. Giving the limitations to the current components, Diaz is hoping to lighten the weight of the kart to increase its range and speed. The kart utilises a motor and transmission from a wheelchair which is mounted onto a welded steel frame. There are two 20 inch BMX wheels at the rear and 16 inch wheels at the front. 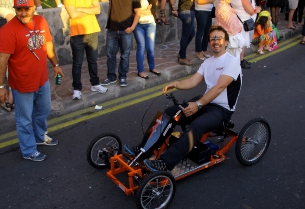 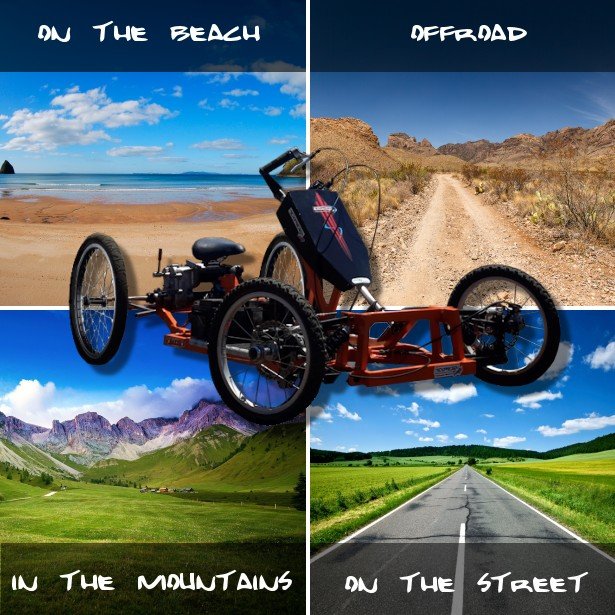 He is hoping to raise enough funds to make the desired changes and improvements to the kart. These include lightening the frame by using aluminium and other commodities such as a built-in GPS system and also solar panels for charging the battery on the go.

If all goes to plan, Diaz is hoping to release three different versions of the kart:

An early bird pledge of €1,499 will secure you an E4 version of the kart, saving $500 from the planned retail price (It's worth noting that you need to add €239 for international shipping). Once all the early bird slots have been bought up you'll need to fork out €1,799 to pre-order an E4. €2,274 will get you an ES4 version that comes with solar panels and €3,444 will get you the EX4 high power version.

Find out more on the Indiegogo campaign here.