Geothermal energy draws on heat from the earth, often around areas of volcanic or geological stress such as the Pacific ring of fire and in the vicinity of fault lines. Some geothermal plants have been operating for over a century. Geothermal is more reliable than solar or wind as it is available for heat and power all the time rather than relying on intermittent weather patterns.

The Geothermal Energy Association (GEA) predicts that the global market for geothermal will add another 600 GW or more per year for the next three to four years, on top of the 600 MW of new capacity added in 2014. Over 700 geothermal power plants are currently under development in 76 countries around the world with Africa, Central America and Asia-Pacific predicted to be high-growth regions.

Turkey’s geothermal power program is driving significant interest in geothermal resources in the country with the assistance of a Feed-in Tariff program and a $125 million early stage geothermal support package arranged in cooperation with the European Bank for Reconstruction and Development (EBRD). It is also supported by a new renewable energy action plan. Meanwhile, the Caribbean island of Grenada has entered a partnership with New Zealand aimed at developing its own geothermal resources. The island carried out an initial assessment in February this year.

Kenya was the first country in Africa to exploit its geothermal energy resources, which is especially cost-effective in the country’s Great Rift Valley. The Kenya Electricity Generating Company has built geothermal plants at Olkaria. A pilot plant of 2.5 MW has been commissioned at Eburru and two small-scale plants have been built by the Oserian Development Company to power the company’s rose farms.

Figures from the Kenyan National Statistics Bureau revealed that 381.6 MW of geothermal power was generated in December 2014 and the Kenyan Electricity Generating Co (KenGen) has found that geothermal power now accounts for 51 percent of the country’s installed power capacity, displacing hydropower as the nation’s largest energy source. Of the wells in the Olkaria region, the OW-923 Trio is the largest at 33 MW. This followed the sinking of a well connected to the Olkaria IV project which achieved 30 MW.

According to Mike Long, executive vice-president of US consultancy Galena Advisors, speaking to Power Engineering International, Kenya will potentially see a growth rate of 200 MW per year for the next five years. Ethiopia, Tanzania, Rwanda and Uganda will most likely follow along behind Kenya as their governments continue to push similar geothermal operations. Kenya itself has received assistance from Japan’s International Cooperation Agency which has agreed to help the Kenyan government expedite development.

Geothermal power in El Salvador supplies 25 percent of the country’s total electricity production, making it one of the top ten geothermal energy producers in the world. The main source of geothermal energy in the country is the Ahuachapan field which has been in continuous operation since 1975. The Berlin El Salvador field began commercial production in 1992 and currently has an installed capacity of 109 MW. The Berlin plant is owned by La Geo SA and uses water separated from geothermal steam to generate electricity. Current estimates predict these two fields have enough power potential for another 25 to 30 years of production. 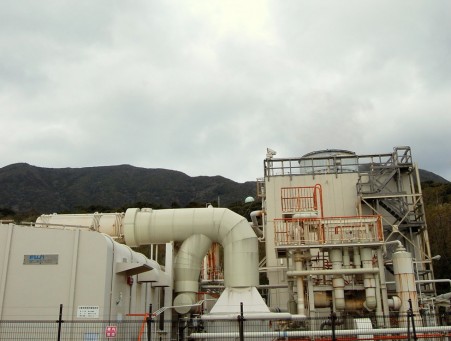 Japan is situated close to the Izu-Bonin-Mariana Arc and therefore has a number of productive geothermal fields. In 2007, the country had 535.2 MW of installed electric generating capacity representing about 5 percent of the total global figure. In 2007, the Japanese Ministry of the Environment released a report which found a total potential geothermal resource in the country of 19.14 GW. Following the Fukushima disaster, Japan has now began to focus on renewable energy development in order to reduce its dependency on nuclear and fossil fuels. Most of this consists of solar power but it is supported by a generous FiT and the country’s Ministry of Economy, Trade and Industry (METI) expects geothermal to provide 380 to 850 MW of new capacity by 2030. Up to 80 percent of this is located in national parks or hot springs but the Ministry of Environment has relaxed the rules on exploitation, allowing survey work in some of these areas and small or large-scale development in others. The government has also increased funding for exploratory drilling from $15 million to $90 million.

Iceland is located over a rift in continental plates and there is a high concentration of volcanoes in the region. This means the country has long had an advantage with regards to geothermal power for both heating and electricity. The country has five major geothermal power plants, contributing a total of 26.2 percent of national energy supply. Approximately 87 percent of buildings in Iceland use geothermal for heating and hot water with most of the electricity (73 percent) being generated by hydro power.

Geothermal power in New Zealand provides 13 percent of overall electricity supply (854 MW). There are numerous sites in the country that could be developed and as fuel prices rise geothermal is being tipped as the country’s most favored source of new energy. Most of the existing geothermal sites are located in the Taupo Volcanic Zone with 25 MWe (megawatts equivalent) at Ngawha.

Currently, about 7 percent of the total renewable energy capacity in Italy is supplied by geothermal representing about 1.6 to 1.8 percent of total electricity generation. The country has 33 active plants, providing 772 MW of capacity. These are all located in Tuscany with the province of Pisa contributing more than half of national production. Enel Green Power opened a new plant in May 2012 in the town of Radicondoli in Siena. This plant has an installed capacity of 17 MW and will be able to generate about 150 GWh per year.

Mexico is currently in third place with regard to geothermal energy production. It has some of the largest geothermal power plants in the world including the Cerro Prieto plant. This is located in the state of Baja California in north western Mexico, situated on the side of a volcano that rises some 260 meters above sea level, although the field itself is only 6 to 7 meters above sea level in the Mexicali Valley. It covers an area of around 15 km2. Exploitation of the country’s geothermal resources has been slow thus far, largely because of the capital intensive nature of the sector. However, this seems likely to change with the plans for energy reform put in place by President Enrique Pena Nieto, which includes provision for private investment.

Indonesia benefits from having a substantial amount of volcanic geology, providing the country with a reported 40 percent of global geothermal potential (an estimated 28,000 MW). Most of this potential resource is untapped, with only 4 to 5 percent of it being exploited. Part of the reason for this is that 80 percent of resource lies in protected forest areas. However, the country also suffers from poor infrastructure and excessive bureaucracy. Installed capacity in 2011 was almost 1,200 MW, provided by six fields in Java, North Sumatra and North Sulawesi but the country is aiming to produce more than 9,000 MW of geothermal by 2025. A report by the Asian Development Bank and the World Bank argued that it would have to enact substantial reforms in its energy policy before expansion of the sector could be achieved.

The International Geothermal Association (IGA) places the Philippines as being second only to the US with regard to geothermal energy production (1904 MW) with Mexico in third place. Geothermal provides 17 percent of national electricity supply according to the Institute for Green Resources and Environment. This is sourced from six fields in the islands of Luzon, Leyte, Negros and Mindanao. New laws have provided incentives for geothermal exploitation resulting in the award of 43 Geothermal Service/Operating contracts and the government is aiming to increase geothermal power by 75 percent. One of the company’s currently interested in assisting the country with its geothermal power program is the Energy Development Corporation (EDC) which recently finalized contracts with South Korea's Hyundai Engineering and Philippines Galing Power & Energy Construction, a Hyundai subsidiary, for the engineering, procurement and construction of a $229 million project in Sorsogon Province which is expected to commence operations towards the end of 2017.

The US is home to the largest group of geothermal power plants in the world, at The Geysers field in California. The country generates around 15 billion kilowatt hours of geothermal power per year, representing the equivalent of 25 million barrels of oil. Most US plants are located in the western states, Hawaii and Alaska. Geothermal is currently the fourth largest source of renewable electricity after hydro, biomass and wind and has the potential to provide over 20 percent of US national electricity supply.