As tensions between North Korea and the US increase, the possibility of a nuclear attack seems more real than ever. While we can only hope the leaders of these countries can use diplomacy rather than weapons, it is critical to ask the big questions about the possible conflict. What would the consequences of a nuclear attack be? What would be the human toll from nuclear missiles? Data visualizer Neil Halloran has created a brilliantly terrifying video that shows exactly what would happen if the red button were pushed.

The video starts out by breaking down some of the numbers around our existing population. According to the video, the population is growing at a rate of about 83 million a year. We then examine how many people have ever died in the last 50,000 years. Looking at the number of deaths each year, the devastation of WW2 is immediately obvious even at such a broad scale. Halloran uses very clever graphics and a very tight script that allows you to understand the otherwise incomprehensible scale of our population data. 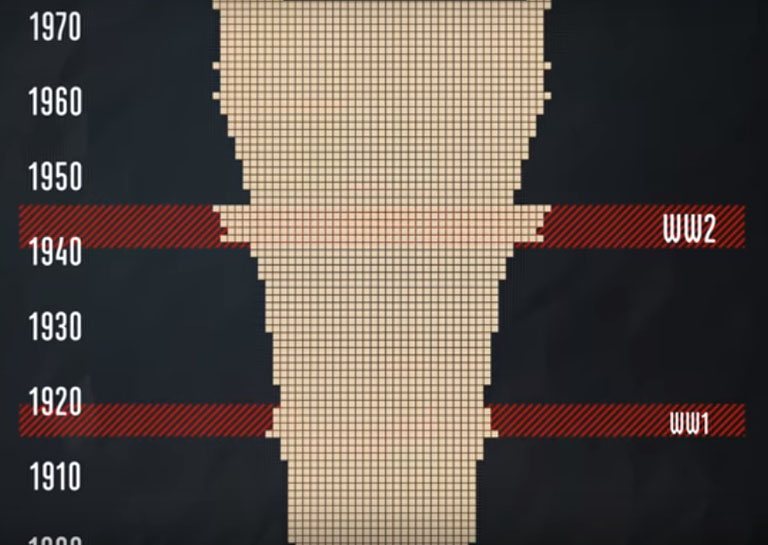 The video then goes on to examine the number of deaths that occurred from the Hiroshima and Nagasaki attacks in 1945. He breaks down the deaths into immediate, within the first hours and days, and the subsequent deaths in the following weeks. It is a harrowing reminder of one of the bleakest periods of our world history.

Halloran then extrapolates on these numbers taking into account the increased power and numbers of nuclear warheads and the increased density of potentially targeted cities to give a hypothesis of what a modern day attack could look like. Halloran admits the numbers would be different depending on where the attacks took place and the success rate of the warheads, but that a death rate of more than half a billion human deaths in three weeks is not unlikely. This is the equivalent of the total number of ten WWIIs. 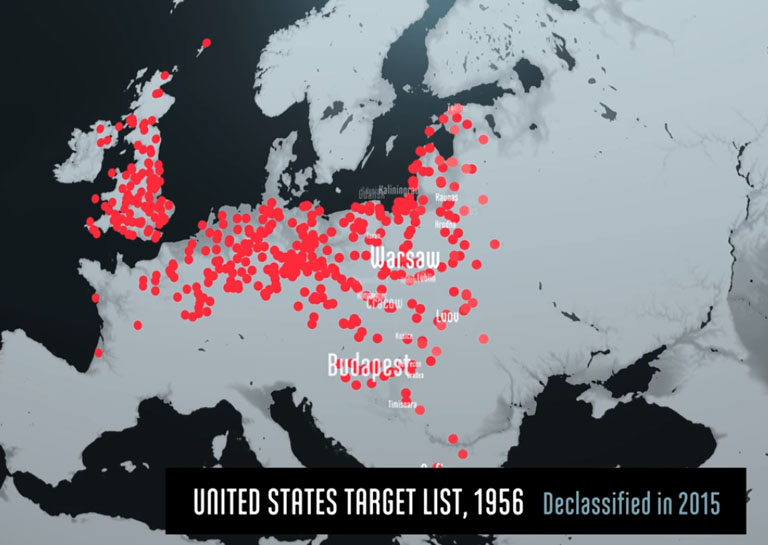 Giant dust storms after nuclear attack could block the sun

While the data is at the moment just guesses, something that is likely to occur in the event of a nuclear attack is the environmental fallout afterward. Halloran points out that attack targets are likely to be underground warhead storage facilities. The destruction of these would cause massive amounts of dust to be released. This dust may gather as huge clouds, strong enough to reduce the impact of the sun rays. The reduced sunlight would shift global temperatures and dramatically affect agriculture causing more deaths from starvation and pollution.

The video ends with some discussion on the future of nuclear programs, thankfully it doesn’t seem to be all bad. Research shows that UN peacekeeping efforts are an effective tool in minimizing conflicts that could result in nuclear war.

Halloran has created a series of videos that break down complex data into easy to understand videos. One of his most celebrated videos is the animated documentary The Fallen of World War II. The captivating film examines the human cost of the second World War and looks at the toll of other wars in history.

Comparing Catastrophes: How Would a Global and a “Small” Nuclear War Impact Our Planet?

How Would a Modern Jet Fare Against Propeller Planes in WW2?

What Would Happen If All Internal Combustion Engines Were Banned This Year?