According to the firm, the milestone rate means "Tesla currently produces more batteries in terms of kWh than all other carmakers combined."

Tesla took to Twitter today to announce that Gigafactory 1, the battery factory in Nevada the firm runs in collaboration with Panasonic, reached an impressive milestone in production. The company boasted an "an annualized run rate of ≈20 GWh - more kWh than all other carmakers combined."

Gigafactory 1 battery production has reached an annualized run rate of ≈20 GWh - more kWh than all other carmakers combined pic.twitter.com/wFIB7E72rX

The news was also shared in the firm's shareholder letter yesterday stating the increased rate had been achieved at the end of July and made the factory "the highest-volume battery plant in the world by a significant margin." 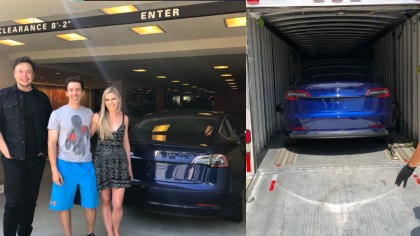 "Consequently, Tesla currently produces more batteries in terms of kWh than all other carmakers combined," read the statement.

Gigafactory 1 manufactures battery packs of 75 to 100 kWh that are bigger than most other automakers.

If Tesla should add the three battery cell production lines Panasonic said the firm would, the increase could easily see the factory reach an annual production rate of 35 GWh, the initially announced rate.

Meanwhile, Tesla's shareholder letter indicated the firm had plans to further increase its Model 3 production to 10,000 cars per week this year. "We believe that the majority of Tesla’s production lines will be ready to produce at this rate by end of this year, but we will still have to increase capacity in certain places and we will need our suppliers to meet this as well," read the letter.

This news will likely not come as much of a surprise to Tesla followers as Model 3 has been outselling all other competitors in the US, a fact the firm proudly revealed on Twitter just yesterday. The carmaker further clarified to a follower that the numbers referred to deliveries.

Model 3 now outsells all other premium mid-sized sedans in the US.....combined pic.twitter.com/FhjKUGK58N

With such demand, Musk is right in seeking to increase battery production rates. In addition, Model 3 made its well-received European debut this month, an event that is bound to contribute to the car's success.

"It’s fair to say that no production ramp of any other product has been as closely watched and debated as that of Model 3," read Tesla's shareholder letter. The scrutiny is likely to continue. Luckily, Tesla seems on its way to delivering on its promises.