Tesla CEO, Elon Musk has reportedly asked suppliers for cash back on previous orders as part of the Tesla profitability plan.

Tesa CEO, Elon Musk, is doing everything he can to achieve profitability by the second half of the year.

Musk has long held the goal of reaching profitability by the end of 2018 and now it's crunch time for the electric vehicle maker. 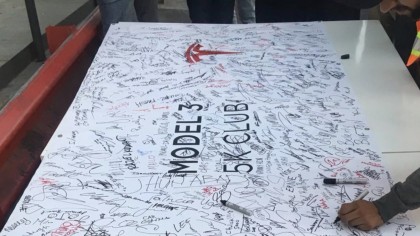 The Wall Street Journal reported that Tesla was asking its suppliers for cash back on old orders. “The Silicon Valley electric car company said it is asking its suppliers for cash back to help it become profitable, according to a memo reviewed by The Wall Street Journal that was sent to a supplier last week. Tesla requested the supplier return what it calls a meaningful amount of money of its payments since 2016, according to the memo.”

Musk tweeted this morning to clarify what the company was up to saying, “Only costs that actually apply to Q3 & beyond will be counted. It would not be correct to apply historical cost savings to current quarter.”

Only costs that actually apply to Q3 & beyond will be counted. It would not be correct to apply historical cost savings to current quarter.

Tesla had previously experienced serious production delays on its Model 3, which reportedly also impacted its supplier. Now that Tesla has achieved its target of 5,000 units per week production rate, the company is in a better position to negotiate with suppliers.

Tesla intends to stretch that goal to 10,000 per week. The ambitious goal will mean Tesla remains in what is called ‘production hell’ for some time longer. After achieving the 5k milestone Musk spoke to Bloomberg saying, “The past year has been very difficult, but I feel like the coming year is going to be really quite good.”

Investors are nervous about the ambitious goals but Musk assured them at a recent meeting that Tesla was well on track to reach 7,000 units per week by the end of the year and 10,000 per week by mid-2019. It is unclear exactly what the deal Tesla needs to cut with its supplier in order to become profitable by the end of 2018.

All eyes will be on Tesla and Elon Musk As they try and fight their ways towards their loudly stated goals.

Musk hasn’t had a moment out of the spotlight this year. He has been in hot water over treatment of staff, as well as the well-publicized scandal where he called a British diver who helped in Thai cave rescue a ‘pedo’ on Twitter.

Reaching the profitability goal seems like the good news Musk needs to round out a turbulent 2018.