The Tesla Coil: The Holy Grail of Electricity Transmission

The Tesla Coil. Free, wireless electrical power, the holy grail of electricity transmission. The near-tangible dream of an engineering visionary. 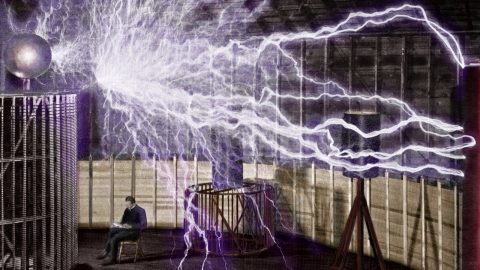 Ah, Tesla. How your inventions have inspired us. Your work ethic, your passion for your craft; how we all wish we'd lived near you as kids, so we could sneak a glimpse of you at work, creating a future you'd never see... Or maybe that's just me. Nevertheless, the man was a genius, by any definition of the word. Famous champion of alternating current, his most well-known invention is the spectacular Tesla Coil. But how does it work?

OK, so, full disclosure: I'm a mechanical engineer. I'm much more comfortable with heat transfer and fluid dynamics than I've ever been with the somewhat mysterious world of electricity. I can empathize with non-technical folk who are baffled by the seemingly magical way in which a button is pressed and the hidden dance of switches and gates brings forth complex outcomes. But, on closer inspection, this secret world may be explainable in relatively tactile terms. So, from one mech-head to I’m sure many others, here’s a blow by blow description of how a Tesla Coil works. And any sparkies out there are encouraged to critique this analysis.

Anatomy of a Tesla Coil 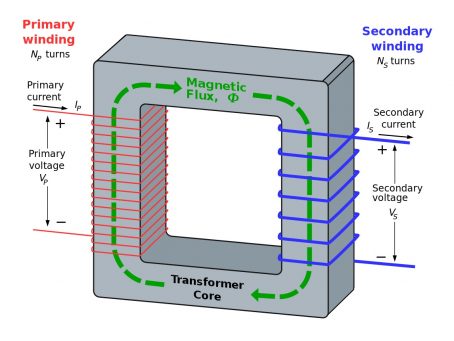 The heart of the Tesla Coil is a transformer, an example of which is shown above. As we’re dealing with massive voltages and frequencies, however, the transformer in a Tesla Coil must be air; any other material would quickly break down under such extreme stresses.

As the name suggests, the transformer changes the voltage from one winding to the other. It does this by directing the magnetic field from the charged primary winding through the secondary winding, inducing a specific voltage. The transformer in the image above decreases the voltage between the primary and secondary windings, as you’d find in your 5V phone charger when trying to charge your phone from a 120V wall outlet. The ratio between the number of windings determines the change in voltage between the windings, so the secondary winding in a phone charger must have twenty-four times fewer turns than in the primary winding. A Tesla Coil does exactly the opposite. 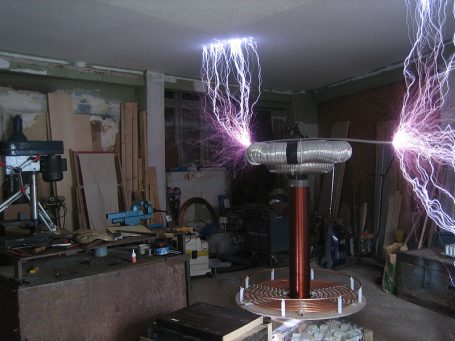 In a Tesla Coil, the primary winding is large (shown above on the horizontal plane) and contains just a few turns. The secondary coil is very thin and has thousands of turns; in the image above, this is the copper coil wrapped around the vertical axis. While, strictly speaking, the output voltage in air-cored transformers is primarily determined by the capacitance and inductance values of the coils, the resultant effect is equivalent to the ratio of windings found in traditional transformers. So let’s keep this simple – more coils in the secondary winding gives you WAY more voltage.

Another key component of a Tesla Coil is the capacitor, which is charmingly likened in many texts to a sponge. Turn on the juice, the capacitor soaks it up until it’s saturated, then BOOM – like squeezing a sponge by slamming it with a mallet, all of the electrical energy bursts into the primary coil, producing a massive magnetic field which induces a similarly massive electric potential in the secondary coil. Once the capacitor is discharged, the current reverses and the process repeats, resulting in an alternating current of a very high frequency.

Perched on top of the secondary coil, positioned to act as a high voltage terminal, is a dome- or torus-shaped cap. The electric potential at this point is now so high that electrons are stripped from the surrounding air molecules, resulting in spectacular purple lightning arcs discharging to the nearest earthing point. Check it out, how amazing is this: 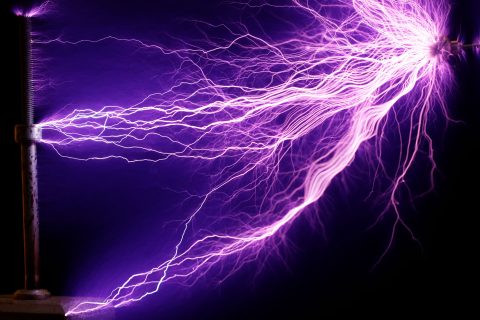 One of the tragedies of history is that Tesla never got to finish his work on his extraordinary coils. We are all shackled to our chargers and outlets for the time being, while the curious and inspired build upon the magnificent legacy of this truly awesome genius.