A group of Tesla lovers—both in and outside of the company—combined their efforts to arrange a special early Model 3 delivery for a dying man.

After long months of anticipation, this week Tesla is ramping up its efforts to begin delivering its Model 3, given that at present most of the people who have managed to get their hands on one of the vehicles in high market demand have been made up of SpaceX and Tesla employees—and of course a lucky relative. Elon Musk and the company had a hard time when it comes to this sedan model and its production.

In the middle of the buzz and excitement, we have been witnessing in the past few months came an unexpected message on Tesla’s blog from a man who diagnosed with stage 4 terminal: he expressed his dying wish to own one of the cars. 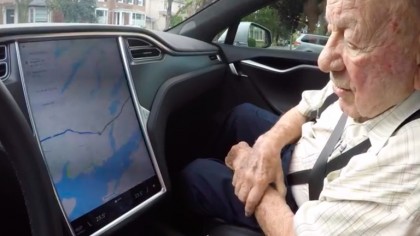 The Tesla Motor Club (TMC) member—under the name of Graniteds—decided to share his story, and passion for the high- performance electric car: “Well, I’d love to see November deliveries! I have a terminal stage 4 cancer and have been told I may only 3-4 months to live. The last thing on my bucket list is our Tesla Model 3 and I'd like to have a few days to experience and enjoy it. I wonder if there is any flexibility in the queue?" The reality of the current production is, however, that only the range of December to February would be possible, even for the first group of future buyers.

Understanding the dilemma and wanting to help the man to carry out his wish, Bonnie Norman, a member of the same forum, decided to intervene and contacted the man, offering him the next best thing to owning a Tesla Model 3: she offered to let him test drive a model in case a delivery wouldn’t have been possible after asking a friend of hers who works for Tesla.

3) I asked @DevinaKSingh, a friend who works for Tesla & owns a Model 3, if she'd show off her car so he could experience it at least. On 11/25, she was at his house, insisting he drive the car hard. (Check the Tesla grin.) pic.twitter.com/5mIEQs1Hle

The surprising series of events happened very quickly. On November 26th, following the test drive, Bonnie appealed to Tesla for an early delivery on his behalf. In this case, it would also require an invitation for configuring the vehicle. Tesla responded quickly and extended an invitation to him the following day.

Dick, the name of the man from the forum, was able to take a tour of the factory at the company’s delivery center in Fremont, California, make all the arrangements for pickup, and in the middle of all the excitement even receive a special tour from John McNeill, who works as Tesla’s President of Sales and Services. Everything went better than expected and without any problems!

On Wednesday of this week, Dick was finally able to start driving Tesla Model 3s car, thanks to generosity and efforts of a few kind and loyal Tesla fans.

Potential customers can get this version of tech wonder for a relatively affordable price - it will cost at least 35,000 dollars. While some people find this to be high (especially given that you can find a standard roadster for less) you have to consider some of its amazing features such as the battery that uses electric energy, autopilot, relatively quick rate of charging (30 minutes after 130 miles), beautiful interior as well as other options.

7) Oh! And he and his wife have their new Model 3. Lots of tears around. Merry Christmas, Happy Holidays. My heart is full. Thanks everyone @Tesla. Thanks especially to @DevinaKSingh and @jonmcneill . We make an awesome team. pic.twitter.com/QChhxKX8hV