Elon Musk's Tesla has removed any mention of the forthcoming standard-option Model 3 from Tesla's website.

Tesla has scrubbed any mention of its Model 3 standard battery option from its website this week, fueling concern that the release of the $35,000 version of Tesla’s popular sedan has been delayed.

As first reported by Electrek on Tuesday, Tesla has removed any mention of the standard battery pack option for its popular Model 3 sedan from its website, calling into question when the promised $35,000 version of the vehicle will be available.

SEE ALSO: TESLA TO GIVE A MODEL 3 TO WHOEVER HACKS ITS CAR

As of now, the cheapest package for the Model 3 available for pre-order is the mid-range version which starts at $42,900, before available tax credits and other savings. Elon Musk tweeted out earlier this month that taking full advantage of tax incentives and fuel savings would lower the cost of the Model 3 to $35,000, which seemed to telegraph this week's update to their website.

According to a filing with the SEC, Tesla indicates that it still plans to go ahead with the standard battery option “in the future.”

This month, Musk told analysts on an earnings call that “We expect to introduce the standard range Model 3 sometime during the middle of this year – it’s a rough, rough guess,” Musk said, pointing to the company’s need to restructure its production cost before they could bring the vehicle to market.

“We’re working hard to improve our costs of production, our overhead costs, our fixed costs, just costs in general,” he said.

Tesla has refused to comment on the change to the website, fueling anxieties about whether an affordable all-electric sedan will be possible in the near future. 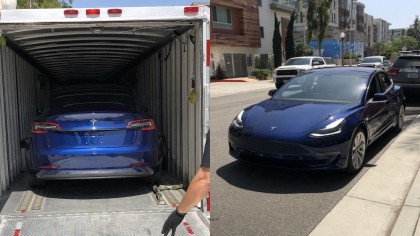 Tesla Will Deliver Your Model 3 Straight to Your House

Right now, the Tesla Model 3’s starting price puts in on the lower end of the luxury vehicle market, out of reach for most consumers. This is seen as one of the biggest obstacles to widespread EV adoption in the United States and is something that Elon Musk has been promising that Tesla would be able to overcome since the Model 3 was first announced in 2016.

Without hearing from the company itself, all anyone can do is speculate about the change to the website, but the ongoing trade war between China and the United States has taken its toll on other industries and has hit Tesla particularly hard in China.

It wouldn’t be that much of a stretch to see how tariffs on steel, aluminum, and parts from China might be driving up the base cost of the standard option Tesla and putting the standard battery option out of reach for the immediate future.