Tesla has finally revoked free SuperCharger access for Model S and X, about a year after Model 3 met with the same fate. CEO Elon Musk announced this major decision with his tweet, which reads:

However, the end to free Supercharger access didn’t come out of blue, it was looming for long. In fact, Tesla has announced this move a few times earlier, but each time extending it for a couple of months.

This time, however, there is no reverting back to the old arrangement.

Tesla tackled the most daunting problem with EVs- refueling on a long drive- with its extensive network of SuperCharger stations which stand at a staggeringly high number of 1,342 with more than 11,000 charging ports. The free refueling access was not just a step in consumer satisfaction but also a great marketing tool to build up Tesla’s credibility and make the brand strong.

Model 3 was exempted from the ‘arrangement’ in early 2017. Tesla also fixed an annual free credit of 400 kWh for Model S and X at that time.

However, they allowed free access to all the new consumers who had a referral from existing owners. The same referral system will now give new buyers a $100 Supercharger credit, which is good only for a few refills.

The prices have been fixed but vary with region and can be noted from Tesla’s website here.

The story behind the curtains

We can guess and argue scores of reasons for this decision but nobody knows for sure what made Tesla take away such a prized facility. The dwindling financial health of the company seems to be the most probable reason.

Tesla has emphasized that it won’t make profits with SuperCharger fees and the revenue will be used for enlarging the SuperCharger network.

But it is clear that the tolls will certainly help Tesla cut costs on its high-valued EVs. The contribution may look small but for Tesla, it will make a great difference in its spending.

The consequences of the move

So, how will the end-user be affected by this decision? Well, it won’t make much difference.

All the Tesla EVs are expensive cars and the owners would not mind paying small fees for plugging their cars in charging ports. The electricity is much cheaper than gasoline and the bills won’t affect the beefy wallets of the owners. 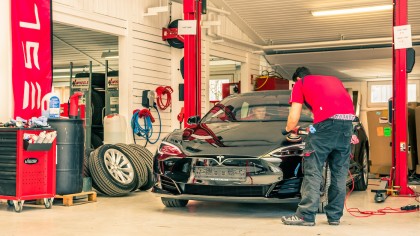 Moreover, SuperCharger access is intended to be used when taking a long tour and most of the folks use their home supply for re-fuelling.

The new move by Tesla is pretty straightforward and there is nothing much to speculate. But it has left us wondering about the upcoming MegaCharger project for Tesla Semi.

We know that MegaCharger access will most certainly be a pay-as-you-go service, but the cost has to be subsidized for the electric trucks if they are to hit the market hard.