The much anticipated Tesla Roadster will be featured on Jay Leno's garage show along with a bonus interview with the car's designer.

Tesla fans are in for a treat as the next-generation Roadster prototype is set to be featured in an upcoming episode of Jay Leno’s Garage. Musk has indicated that the Roadster isn’t a priority for the car company at the moment but the TV episode will offer a chance to get a closer look at the much anticipated electric vehicle.

The episode will air on Thursday and will feature an interview with Tesla’s Chief Designer Franz von Holzhausen. Tesla has been fairly quiet about the Roadster since its unveiling back in November 2017.

The show will provide a first real look at the prototype

The dim lighting of the preview event meant it was hard for fans to get a good feel for the future vehicle. But by combining, launch images, the occasional rare sighting and the promotional images from the show, it seems like the ‘hardcore smackdown’ of a car will feature a butterfly steering wheel and possibly have removable side mirrors.

At the time of the Roadster's launch, Elon Musk bragged that "This will be the first time that any production car has broken 9 seconds in the quarter mile.” As well as being quick, the new Tesla Roadster will have unprecedented stamina.

It will have a range of 620 miles on a single charge. Musk explains the huge range saying: "The point of doing this is to give a hardcore smackdown to gasoline cars. Driving a gasoline sports car is going to feel like a steam engine with a side of quiche.” 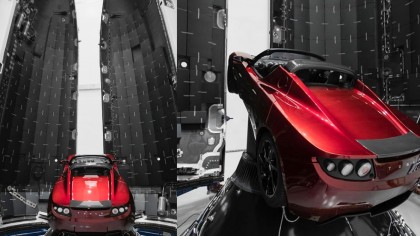 Elon Musk Really is Sending a Roadster to the Red Planet

Roadster set to be the fastest car made by Tesla

The fully electric vehicle is reportedly capable of going from 0-60 mph in 1.9 seconds. It may just fulfil Musk's ambitious claims of being the first such car ever to break the two-second mark.

The Roadster's top speed wasn’t revealed at the launch but Musk hinted it was "above 250 mph". The Roadster will feature three motors using a similar system to the Model S P100D.

One motor will drive the front wheels and the other engines will drive a rear wheel each to make the car all-wheel drive. At the time of the launch, the car was described as a 2+2, meaning two adults can sit up front comfortably and small people could squeeze into the back.

Since then rumors have circulated that the back seat has been ditched altogether. Some Tesla fans have already laid down their deposit for the car that is expected to roll off the production line in 2020.

Super fans were given the option to put down a deposit on their purchase of $50,000 which in addition to securing them one of the first-to-be-made cars got them the privilege to take the prototype out for a test drive on the launch night. Not a bad deal!