‘Teslaquila’ could be the latest in a line of unique sales assets for Elon Musk’s companies.

It’s not quite the Boring Company’s flamethrower, but Tesla’s latest trademark idea is generating quite a bit of buzz. The Tesla company recently filed a trademark for the name ‘Teslaquila’

The name itself goes back several months to April 2018. Musk took to Twitter to joke about Tesla going bankrupt.

In the series of tweets, Musk joked he was found “passed out against a Tesla Model 3, surrounded by ‘Teslaquila’ bottles, the tracks of dried tears still visible on his cheeks.”

And apparently, the joke triggered something in Musk to get a trademark for the “Teslaquila” name. The trademark is more specifically for "distilled agave liquor" and "distilled blue agave liquor."

The information was just released to the public today despite being filed months ago.

Tesla fans seem to be on board with the idea, especially given that the cars' autonomous features are improving.

The cars drive themselves, find a new slant.

Musk is no stranger to releasing limited-edition items that have nothing to do with the core foundation of one of his companies. In July, Tesla launched a surfboard as a product -- yet another thing completely unrelated to electric vehicles or autonomous driving. 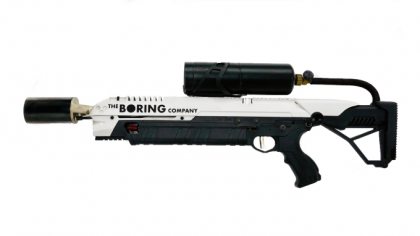 “Designed by the Tesla Design Studio in collaboration with Lost Surfboards and Matt “Mayhem” Biolos, surfboard shaper for world Surf League Championship athletes," the company said in its description of the surfboard. "The Limited Edition Tesla Surfboard features a mix of the same high-quality matte and gloss finishes used on all our cars."

And with the success of the flamethrowers with the Boring Company, we cannot wait to see how well the Teslaquila goes over.

The Cyberquad Is Back: Tesla Just Filed a New Trademark Application