It seems Tesla is in the spotlight again, and this time for claims that it is overreaching its battery cell demand.

By recent accounts, many companies are now facing a serious global shortage of cylindrical battery cells. In the midst of this issue, recent statements coming out of Korea, a country which houses many of the world’s major battery manufacturing operations, have pointed the finger squarely at tech company Tesla, specifically to Gigafactory 1 based in Nevada. Korea’s ETNews, citing industry sources indirectly, shared the following account:

"Delay in production from Gigafactory, which is Tesla's battery manufacturing facility, is leading to a global shortage of cylindrical batteries. As Panasonic has given most of its supplies in Japan to Tesla, many small and large companies that are in need for cylindrical batteries are knocking on doors of Samsung SDI, LG Chemicals, and Murata (previously Sony)." 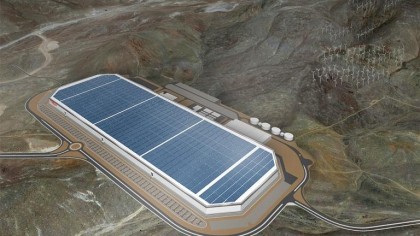 Tesla was under fire earlier this year for its delays—only six months into launching the Gigafactory in Nevada—the issue being that the amount of incoming Model 3 battery packs were not sufficient for maintaining production levels. “The major factor affecting Tesla’s Q2 deliveries was a severe production shortfall of 100 kWh battery packs, which are made using new technologies on new production lines,” Tesla shared in a mid-year statement. The company rebounded very well, however, and has continued its production uninterrupted since that time.

It’s interesting that Panasonic would be implicated in the report from ETNews, as well. At current, the 2170 battery cells used for the Model 3 are jointly produced by Tesla and Panasonic at the facility. The report, then, may be implying that additional supplies, which were undisclosed, were needed. ETNews also released a statement elaborating on the claim:

"As there was a serious problem with the operation of Tesla Gigafactory, Panasonic had to bring its supplies from Japan in order to patch up this problem. Panasonic is even supplying its batteries that are produced in Japan to Tesla for its electric vehicles.“

This is an interesting statement, given that Tesla's CEO Musk made it clear earlier in the year that the Model S and X will production will continue with the same formula, and that the 2170 cell would only be in use for the Model 3, Powerpack 2 and Powerwall 2 products.

According to reports, there are several big reasons why factory isn't able to meet its battery production goal. First of all, there aren't enough people in the area to work in the plant producing lithium batteries. Next thing that has to be mentioned is plant's reliance on renewable energy. This huge, 1.9 million square feet factory requires lots of energy to be powered. However, Tesla is still trying to produce its own electricity through wind turbines and solar panels installed on the roof. While this technology is great, it is currently unable to meet the full power needs.

Tesla Gigafactory 1 is going to be crucial for Tesla's future; in particular, car production. According to projections from 2016, this site should significantly reduce the cost of vehicle battery that Tesla uses allowing them to build 1.5 million cars per year.

It is not clear whether the report was aimed at taking the wind out of this Fortune 500 company, or whether a legitimate concern is being raised. Some experts view this as an attempt to affect company's position on the financial market. We are all aware, generally speaking, that there is an impact that the high output, production-driven objectives of many of the biggest global industry leaders, Tesla among them, has on global raw materials supplies. Still, few outside of the industry may be aware of the inner workings, closed-door meetings and at times not-so transparent correspondence within the industry regarding how these resources are shared. In the final analysis, scrutiny or wake up call, only time will tell.

As Tesla sets its eyes on bigger goals and announces plans to increase output to levels far exceeding many of its competitors, the world will be watching carefully to see whether the high yield promises of Tesla can indeed match its capacity. For now, we reserve a position of cautious optimism in years to come.

Does the Future of Battery Tech Lie in... Rust?