After some delay, Tesla have confirmed they are close to installing the first batch of their solar roof tiles.

Tesla has confirmed they are finally ready to start the installation of its premium solar roof tiles onto regular customers' houses. The homes of the customers who reserved the tiles have reportedly begun to be surveyed ahead of the tiles' delivery.

The Tesla roof tiles generate solar energy without the need for additional PV panels. The product was unveiled in October 2016 and at the time CEO of Tesla, Elon Musk suggested the first installation of the revolutionary product could happen by the Summer of 2017. But like many of the Tesla products, the tiles encountered some production hiccups. In November, Musk said spoke about the delays saying,"it just takes a little while to get this behemoth rolling."

As part of the tiles' testing process dozens of Tesla employees had the tiles installed in their own homes including Musk and Chief Technical Officer JB Straubel. Customers keen to get the tiles were asked to lay down a $1,000 deposit via its website when orders for the product opened in May. The first of those orders are expected to be fulfilled in the coming months.

Tesla claims their tiles are cheaper than regular solar panels

Tesla has claimed that their solar tiles will cost between 10 and 15 percent less than a roof plus regular domestic solar panels. SolarCity co-founder and CTO Peter Rive broke down the costs of the tiles saying that inactive tiles would cost about $11 per tile, and active (solar) tiles would cost about $42 per tile. Tesla has previously described how roofs would be installed with a mix of active and inactive tiles based on surveys of how much sun each part of the roof receives. A total estimated cost for a new Tesla solar roof is around $21.85 per square foot, if 35 percent of the panels are active and the rest are inactive. The potential benefits and savings of installing a Tesla solar roof depends on local sunlight conditions as well as local government incentives and schemes. Customers considering the tiles are urged to investigate multiple options before committing to any one supplier. 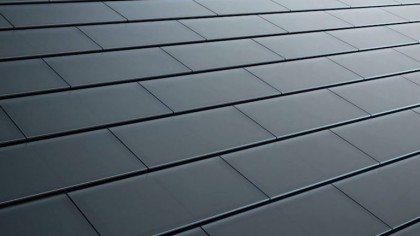 Tesla will team up with their long-term collaborator, Panasonic to manufacture the solar systems at the Buffalo factory. The company has reported there are now more than 500 workers at the site dedicated to this project. Production of the tiles began at the Fremont factory but production seems to be increasing in ferocity with its transference to the Buffalo campus.

Tesla has expressed its hope to achieve more than 1 gigawatt of cell and module production in Buffalo, though no timelines have been publicly given to meet this goal. Tesla confirmed both models of the tiles, Textured and Smooth, began production in the last quarter of 2017.

The Model 3 sedan has been plagued by production delays and missed schedule. Tesla says it will focus most of the company's energy on producing these cars and suggested they were on track to build 2,500 Model 3s a week by the end of the first quarter, half the number they had originally promised.