Tesla has rolled out a new feature that keeps the air-con on for your furry friend.

Your pets are now safer than ever inside your Tesla. The electric car company has rolled out a new feature designed to keep your dog safe when you need to run short errands. ‘Dog Mode’ keep the air conditioner on in the car as well as display the car's temperature and a message for passersby on the vehicles center screen.

The idea was implemented after a Twitter user asked if a pet safety feature could be implemented. In the style that we know and love, Musk responded to the tweet with a simple yes.

Today Tesla owners can comfortably leave their pet inside their car while they park for short time. When in Dog Mode, the center screen of the car displays a message letting observers know that they won’t be long and that their pet is safe.

The feature is easily accessible through the car's settings. If your Tesla's’ battery dips below 20% while in Dog Mode you’ll get an alert to your Tesla app on your mobile phone.

Tesla pet owners should check with their local regulations about pets in cars as some parts of the world prohibit leaving furry friends inside vehicles under all circumstances.

The American Veterinary Medical Association says hundreds of pets die in parked cars each year when owners underestimate the interior temperature of the car. 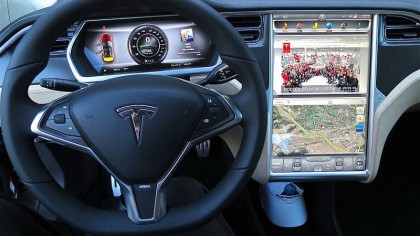 When activated the car enters a type of standby mode and monitors the close surroundings with external cameras. If activity deemed risky is observed, the car then switches to "alert mode."

This mode displays a message on the cars center screen alerting those within view that the surrounds are being monitored. If a more serious threat occurs such as a window being broken, the alarm activates, the center display gets brighter and the car’s audio system plays at maximum volume.

Simultaneously an alert is sent to the car's owner via their smartphone. The video recording is able to be reviewed only if a formatted USB is plugged into the car's system before turning on sentry mode, which you can do by going to Controls > Safety & Security > Sentry Mode on your center screen.