The company has also sent Tesla employees to install the systems on the island. Puerto Rico will most likely not have electricity for up to six months.

In an act of tremendous charity, Tesla Inc. is sending aid to Puerto Rico in the form of hundreds of Powerwall battery systems. Over 3.5 million citizens in the American Commonwealth still do not have electricity due to the impact of Hurricane Maria, a category 4 Hurricane that ripped through the Caribbean island more than a week ago.

The hurricane destroyed their electricity grid, killed 16 people and injured much more. Generators are only providing electricity to high-priority buildings such as hospitals.

Full power on the island is not expected to be restored for up to six months. Musk decided to take advantage of the sunshine over Puerto Rico and look for alternative power generation and supplies.

The Powerwall systems can be paired with solar panels and will be useful to both residents and those providing aid to the stricken island. Musk also personally donated $250,000 to the relief effort.

Tesla employees are currently in Puerto Rico installing the systems and repairing solar systems already there. They are coordinating their efforts with local organizations to identify locations. Some systems are already there while more are en route.

The Powerwall system was first introduced in 2015 as a battery designed to store energy for homes powered by solar panels. It is a rechargeable lithium-ion battery with liquid thermal control. An updated version was launched in 2016 and is priced at $5,500.

Powerwall 2.0 works by storing excess energy produced by solar panels during the day for use later on. The power is there to use when the sun goes down, instead of having to buy from a utility. It also comes with a 10-year warranty which is good news for Puerto Ricans.

Technology to the Rescue

This isn’t the only tech company pledging support to the hurricane relief efforts all over. Facebook dispatched a connectivity team to supply emergency telecommunications support to Puerto Rico, which is still a communications black spot. 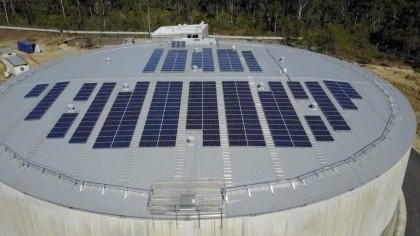 "Communication is critical during a disaster," Facebook founder Zuckerberg wrote in a post on Wednesday. "With 90% of cell towers on the island out of service, people can't get in touch with their loved ones—and it's harder for rescue workers to coordinate relief efforts."

Tesla also extended a hand to those affected by Hurricane Irma, who also own its cars. After a Tesla owner requested an extended battery range as they prepared to evacuate their Florida home and didn’t know if their car would make the trip.

To alieve their worry, the company pushed out a temporary software update to extend the range for all Model S and Model X Tesla cars with a 60-kilowatt-hour and 70-kWh battery packs. The packs were expanded to 75kwh capacity, with an additional 30 to 40 miles above its typical range, until September 16th.

Via: The Verge, Fortune, Energy Sage.

Here's why hundreds of Mazdas tuned to 94.9 broke simultaneously