The dashcam footage hints that the new-age Tesla models are better than we imagined!

In a near-miss accident caught on video recently, a guy named Eric Laperriere driving his Tesla Model 3 on autopilot, had a dangerous encounter on an iced road. Eric was driving on a highway outside Montreal when his car, which was on autopilot, drove over some ice. The vehicle sliding out of control, can be seen in the video.

However, as claimed by the driver, the driver-assist system of the car regained control before it was too late and moved it back to its original lane.

The Driver’s Take on The Accident

Tesla vehicles are expected to feature strong stability and traction, the Model 3 owner from the Quebec region claimed that the autopilot did more than just that. If the driver is to be believed, with the help of traction control as well as AWD in the autopilot system, the vehicle managed to regain control automatically and drive its way back into the center lane.

Eric also added that during the entire incident, he did not touch the steering wheel even once. In his own words, “I didn’t touch the wheel once. Everything was done through Autopilot and the AWD system. […] The steering wheel was moving so fast that I preferred to let the car handle it.”

Going by the driver’s words, for the vehicle’s autopilot to regain control of the car and bring it back to its original lane is quite a feat. Although there are several stability control systems in the market, this level of precision and quick judgment is a whole new level of impressive engineering.

In addition to that, the driver must also be felicitated for not trying to control the steering wheel during the entire process. It is natural in times of emergencies to try to control the course of events out of panic.

However, if Eric had gone on to attempt to navigate the steering wheel, the autopilot could have backfired and resulted in an accident.

Quebec saw plenty of rain last week, which subsequently resulted in frozen ice on the roads. In such a situation, it is not surprising to lose control of one's vehicle on black ice. 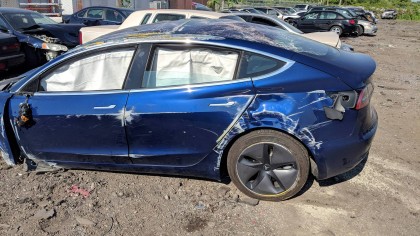 Model 3 Rolls Over In Wreck but Sustains 'Minimal' Damage

Without mingling words, the truth is that any driver will have a difficult time navigating through the road and regaining control of the vehicle in such a driving condition. Therefore, Eric’s quick thinking and non-attempt to control what was happening probably saved his life as well as his car.

It is interesting to note that an automated system goes far beyond us humans when it comes to covering this aspect of driving. It is essential to understand that despite autopilot gaining more steam with time, drivers must remain cautious and act as quick as the driver assist system itself in times of such an event.