Tesla has been officially crowned with the title of the first production electric car to exceed 1000km on a single charge!

Tesla Club in Italy set the most recent official record

The record was achieved by owners of a Tesla in Italy. The Tesla enthusiasts drove a Tesla Model S 100D 670 miles on a single charge — a new record distance. The owners announced the news via Twitter accompanied by a photo of the vehicle display and a brief explanation.

Tesla CEO was quick to congratulate the car owners in his own Twitter feed.

The photo posted by the group shows it took 98.4 kWh of energy to go 670 miles. This is almost double the usual efficiency of a Tesla Model S, which is 300 Wh/mi. For a more in-depth explanation of watts per mile, check out this forum. 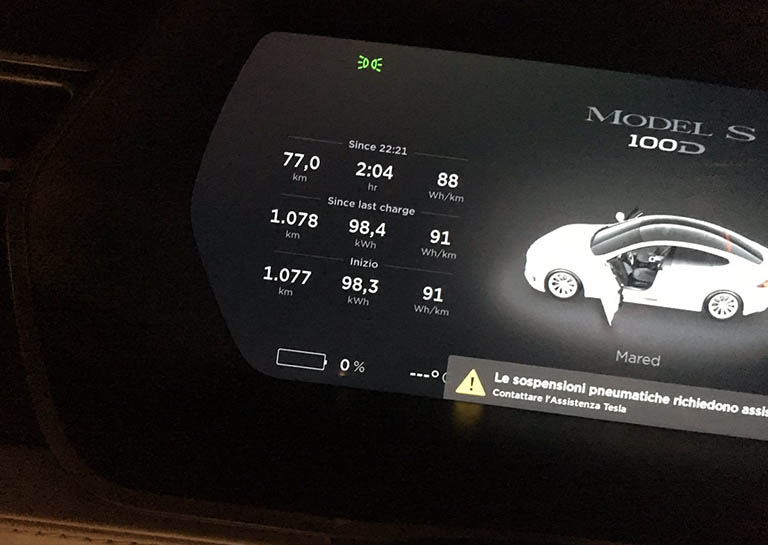 It is important to note, the car didn’t achieve this record by just driving around a city. The exciting milestone was accomplished by using a specific technique developed to push cars' efficiency. The move is called hypermiling. When a car is hypermiling the driver is trying to get maximum mileage from the car no matter what.

In the case of the Tesla Model S record, the vehicle was probably driven at around 23 miles an hour for 29 hours straight. But even though it was achieved under pretty unusual conditions the record is still big news for EV enthusiasts. It shows what the vehicles can do when really pushed and it will probably inspire the car makers to aim for these numbers when driving under ordinary conditions. The United States Environmental protection Agency (EPA) set the official range for the Model as follows:

Which is significantly lower than what was achieved by Tesla Italia.

Before this new record was announced, the previous record for the longest continuous drive was set by Steven Peeters and Joeri Cools of Belgium, who managed to get 560 miles out of a Model S. The latest record might set off a chain of new record attempts on other cars too. Once the Model 3 gets going in production and the car is in the hands of more people there is no doubt mileage records will be broken with that vehicle too.

SEE ALSO: Tesla Says It Is Getting More Than 1,800 Orders a Day for New Model 3