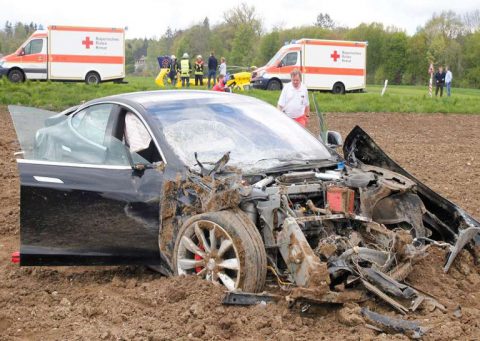 A Tesla Model S was recently involved in an insane, terrifying crash, but all five passengers emerged from the car with serious, but non-life-threatening injuries. They were all able to exit the car without assistance from first responders. They were then taken to a hospital by helicopter.

The crash occurred in Pullach, Germany. The 18-year-old driver took four of her friends for a joyride in her father's Tesla Model S. The teenager lost control of the car on a sharp curve which caused the car to fly 82 feet in the air, finally hitting the ground in a field at full speed. Then the Model S rolled over at least once after crashing. It takes an excessive amount of speed to roll over a 5,000-pound Model S with a low center of gravity, but this crash certainly did it. Remarkably, the cabin of the Model S appears to be unscathed even though the entire front-end is completely crushed. Even the windows and windshield are not shattered. 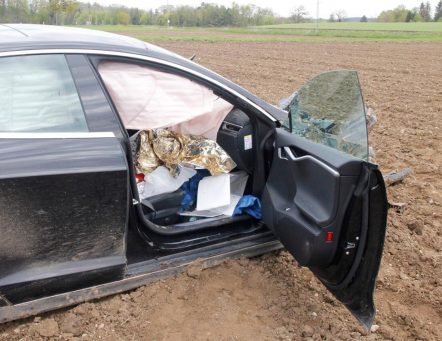 The enormous crumple zone of the Model S is the main reason that the crash ended the way it did. Crumple zones of electric cars are far superior to gas vehicles because they don't contain an engine in the front compartment. Instead of an engine in a Tesla, there exists a frunk, which is basically a front trunk that is completely empty. The empty trunk of a Tesla creates a big area to absorb the energy of a front end collision. Elon Musk, CEO of Tesla Motors explains the crumple zone using the analogy of a pool:

“It’s just like jumping into a pool from a high diving board — you want a deep pool and one without rocks in it.” -BGR

When NHSTA (National Highway Traffic Safety Administration) performed their safety tests on the Model S, they had to create a new way to make the Tesla roll over. The exceedingly low center of gravity of the Model S prevented it from being vulnerable to traditional NHSTA procedures. Also, when they tested it with a frontal crash, it exhibited far more dissipation with respect to both distance and force than any other internal combustion engine vehicle.

This is yet another indicator that Tesla Motors is manufacturing automobiles with superior design features. If you needed another reason to get a Tesla, this would probably be it. 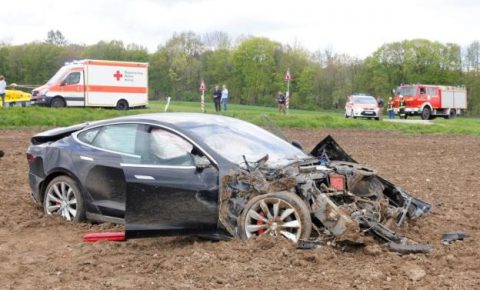