Tesla's latest Autopilot update puts speed and distance adjustments at the fingertips of the human behind the wheel.

Tesla just made a sizable change to its user interface and solved one of the Model 3's biggest issues. The company announced that it's moving key functions -- including Autopilot -- to the steering wheel.

Prior to this, those functions had to be activated by pressing buttons on a center display. Like any other central console, it could effectively pull the driver's eyes off the road. The new update puts a driver's ability to change cruise speed and follow distance right at their steering wheel for easy access. 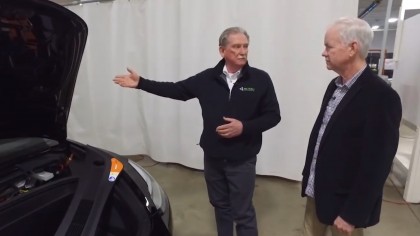 According to the company, the controls are simple to use when you're not looking at them. When in a Traffic-Aware Cruise mode, drivers should just use the right-hand scroll button to move speed up or down. To change the distance, they just have to simply push the button right or left.

Tesla did note that these buttons can still be registered as voice commands via the touchscreen.

This video from YouTube channel LivingTesla gives a pretty good walkthrough of some of the key differences between the Model 3 Autopilot when compared with those of the Model S and Model X units:

Here are the full notes from the release per Tesla:

"For your convenience, we’ve updated the functions of the scroll buttons on the steering wheel. The right scroll button now lets you quickly adjust Traffic-Aware Cruise Control settings. To increase or decrease the set cruising speed, roll the right button up or down. To adjust the follow distance between you and the vehicle ahead, press the right button to the left or right. You can still adjust these settings from the touchscreen and press down on the button to activate voice commands.

"The left scroll button now lets you adjust your Model 3 side mirrors and steering wheel. Start by tapping the Controls icon on the bottom left corner of the touchscreen and then tap Quick Controls > Adjustments

"To adjust the mirrors, tap Mirrors and select the LEFT or RIGHT mirror icon. Then, scroll the left button up or down, or press it left or right.

"To adjust the steering wheel, tap Steering Wheel and scroll the left button up or down, or press it left or right."

It could take Model 3 owners a while before the interface reaches them; Tesla phases in changes and sends out these updates in batches rather than one massive update. However, given the recent discussion around distracted drivers behind the wheel of self-driving vehicles, there might be a bigger focus on redirecting the attention of a human away from an attractive console and back on the road.