Green Mountain Power, a power company in Vermont is leveraging stored power to reduce power costs during a predicted heatwave. The company will use a network of Powerwalls in domestic residences in combination with stored solar power from GMPs Stafford Hill Solar Facility in Rutland, and GMPs new battery storage project in Panton.

The stored energy is predicted to be enough for about 5,000 homes during the peak. "We know our customers are environmentally conscious and make smart choices about their energy use every day. In this heat wave, our customers’ safety and comfort is key. We are so glad to be able to leverage innovation like battery storage to bring down costs for customers and keep them comfortable and safe," said Josh Castonguay, Vice President and Chief Innovation Officer at GMP. "Our growing network of stored energy is allowing us to use technology, in partnership with our customers, to deliver innovative solutions today," he added.

Tesla and GMP team up

Vermonters have been active in installing Tesla Powerwall batteries, so far more than 500 homes in the area have had them installed. The Powerwalls provide backup power, in a way similar to a generator does, but in this case the power is supplied either by customers’ own solar arrays or off the grid.

Green Mountain Power prides itself that 90% of its power sources are carbon free. The Powerwalls provide clean and reliable power during outages and peaks and GMP can also access this stored energy in times of high demand which in turn reduces the overall cost of power.

Locals get Powerwall for a fraction of the cost

Tesla and GMP came to an agreement that allows GMP to operate the domestic Powerwall network much like a virtual power plant. Under their agreement with the electric utility, homeowners who install a Powerwall are able to use it for backup power for “$15 a month or a $1,500 one-time fee”.

This is much less than the average price of the device wi=hcih sits at around, $7,000 USD. In return for this saving Green Mountain Power is able to access the energy in the pack to support its grid. 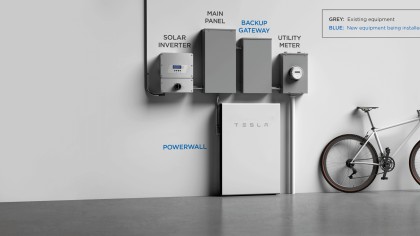 The 500 installed Powerwalls over the company have over 5,000 kWh of energy capacity to release during peak demand. GMP says it hopes to have more than 2000 Powerwall customers by the end of the year.

As the capacity increases, GMP will be able to respond even more accurately in times of energy demand. Tesla is famous for its large-scale energy storage projects which involve the commercial version of Powerwall called Powerpacks.

However more ‘virtual power plant’ projects have just recently been announced including a large on in Australia that will see Powerwall be introduced into more than 50,000 homes.