The custom-made boards feature a mix of the same matte and gloss finishes used on Tesla vehicles combined with patented tech from the world's most recognizable surfboard brand Lost Surfboards.

Tesla added a rather unusual product this week to its online shop. The famed maker of electric vehicles announced the release of only 200 limited edition carbon fiber surfboards.

Never to be outdone, the boards were created in collaboration with none other than famous surfboard shaper for World Surf League Championship athletes Matt Biolos, founder of the world's most recognizable surfboard brand Lost Surfboards. The Tesla boards combine the firm's advanced finishes with Biolos' signature "Black Dart” patented carbon fiber.

Black Dart is a superior fiber that replaces the traditional bidirectional carbon weaves predominantly found on boards. The material is less rigid and more forgiving making the board better equipped to handle impacts and respond quickly. 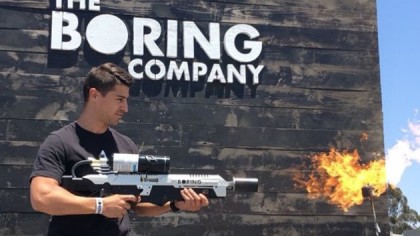 "The Limited Edition Tesla Surfboard features a mix of the same high-quality matte and gloss finishes used on all our cars. The deck is reinforced with light-weight “Black Dart” carbon fiber, inspired by the interiors in our cars, and featuring tonal logos in subtle contrast gloss," reads Tesla shop's product page.

According to the site's description, the sleek board has been upgraded for performance with many impressive features including thin rails for maximum control and forward thickness flow for superior paddle-ability. The board's bottom has also been equipped with two layers of 4oz cloth to ensure optimum dent resistance.

The surfboards have been designed to fit comfortably on the inside or outside of Model S, X and 3 cars. Each of the 200 available surfboards are custom made to order and will require two to 10 weeks for delivery.

Already out of stock

At $1500, the Tesla boards are more than double the price of even Lost Surfboard's most expensive models. However, that does not seem to have deterred buyers.

The company's site already indicates that the product is out of stock. And people have taken to Twitter to complain.

The fact that it's sold out is probably good for me tbh.

Well we didn't see this coming...did anyone manage to snag the #TeslaSurfboard before it sold out? ?#Tesla #surfing #surfboard #brandeverything pic.twitter.com/cOl5YYs0lZ

It seems the boards were quickly snagged up even by folk who do not surf. Like most limited edition novelty products, it could be safe to assume that the boards would have a high resale value now that orders have been closed.

In other news, Tesla dropped some new merch... It's a limited edition surfboard. No, I don't surf. But it's red and matte black. So I snagged one ¯\_(ツ)_/¯https://t.co/2v2G7bnALC pic.twitter.com/aWuMYHK3JC

First flamethrowers now surfboards, we are excited to see what amazing random product Elon Musk comes up with next. Whatever it is, it will likely sell out fast.