Elon Musk has unveiled a new design drawing for the forthcoming Model Y at a recent shareholder meeting.

Tesla has released new teaser images of the upcoming Model Y at a recent shareholder meeting. Despite the car not expected to be released for several years, Musk has been slowly dropping design images of the car.

Little is know about the Model Y except that it is expected to be a Model 3-size utility vehicle. Musk had previously hinted the car would have similar ‘Falcon Wing’ doors to the Model X.

The latest mysterious sketch of the Model Y gives little away. Showing a flat windscreen vehicle with a snubby open grille.

He said the car won’t have any leather in it, perhaps a design move inspired by his latest romance, vegan pop star Grimes. He went on to joke there might not even be a steering wheel to wrap in leather:

“Model Y will not have any leather in it, even in the steering wheel….even if it does have a steering wheel.” Musk says the car will be fully unveiled in March 2019.

Musk might be hoping the release of the Model Y image deflects some attention away from him and back to Tesla. The ambitious CEO has had a rough run with the press in recent weeks.

Musk hits back at press

Late last month he hinted that he was considering creating a website that ranked the integrity of news sites and journalists after claims journalists were attacking him to boost the reputation of traditional car companies. Musk's unease with the media comes close to a series of articles detailing poor workplace practices in his companies, such as rumor he actively discouraged workers to form unions.

Tesla has also been under scrutiny by industry observers questioning whether the Tesla vehicles live up to their purported performances as well as whether the company has the ability to deliver on its future production promises.

Musk tweeted he was thinking of starting a website called Pravda that would rank articles according to journalists reputation and sources rather than clicks in an effort to curb false news reports.

The suggestion, while a worthy one, begs the question about Musk’s own long relationship with the media. 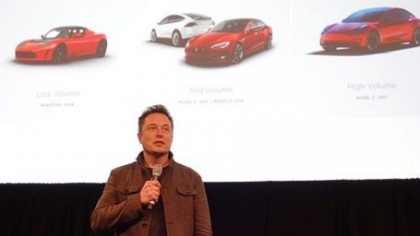 This usually positive relationship with the press is so ingrained in Tesla’s Modus Operandi that it is even written into business plans. A recent publicly available document describes how the media is used to reduce advertising costs.

"Historically, we have been able to generate significant media coverage of our company and our vehicles, and we believe we will continue to do so," Tesla wrote. "To date, for vehicle sales, media coverage and word of mouth have been the primary drivers of our sales leads and have helped us achieve sales without traditional advertising and at relatively low marketing costs."