Tesla has revealed its largest Supercharger station in time with the release of their Semi truck. The station has solar panels on its roof and a waiting lounge for drivers.

Tesla just completed its biggest Supercharger station in the United States. Located about halfway between Los Angeles and the Bay Area, the station is equipped with solar panels on the roof and a cool lounge area to rest up while your Tesla charges. 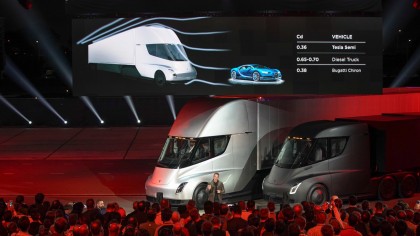 The station is being compared to a truck stop and for good reason. Tesla just unveiled its first Tesla Semi truck. Tesla had hinted before that it wanted to build bigger Superchargers and this is the first step in a new breed of services that as time goes on will look more and more like the traditional American Truckstop burnt into our collective memories from summer road trips and scary films. Tesla already has plans for another large Supercharger in Baker, California, between LA and Las Vegas. Looking at photos from the site as it undergoes construction, it looks like this Supercharger is not only ready for Semi’s but as a stopover for drivers to grab coffee and supplies before continuing on their journey. The original Supercharger stations weren’t designed for Semi trucks so the timing of the new station makes sense.

Both of the new Supercharger stations have solar panels on the roof of the building and the charging canopies. The station will need to remain connected to the grid as the power demand is much higher than what could be generated from the panels alone. In June this year, Tesla CEO announced via Twitter that “All Superchargers are being converted to solar/battery power. Over time, almost all will disconnect from the electricity grid”.  The claims were made in response to another Twitter user who tweeted at Musk saying: “Unfortunately I can stand at the Tesla superchargers and see the coal power plant. Play the shell game all you want these are coal powered.”

The argument that electric cars are at some point powered by non-renewables is partly true in most parts of the world where cars are being re-charged from power sources derived from coal, nuclear or gas. However electric cars are still more efficient than most of the most efficient fossil fuel-powered cars. So driving an electric car that has been charged from a coal-powered source is still better for the environment than driving a regular petrol-fuelled vehicle.

China is a huge market for Tesla

Tesla charging stations are being built all over the world. The largest of these is in Shanghai, China. The underground Supercharger station has fifty stalls, ten more than the previous biggest station. China is a big market for Tesla, they reportedly sold 1 billion USD worth of cars in 2016, about 15% of the company’s total sales. The company is apparently and are in negotiations with the government in Shanghai to open a manufacturing facility. If the plans do get underway, the sales of Tesla can be expected to soar as being able to buy a locally produced car would remove a 25% tariff and 17% value-added tax on the imported made-in-America models. Electric vehicle buyers in China do enjoy generous government subsidies as the country focuses on going green but these are likely to phase out by 2020.

Via: Tesla, The Verge

The US government is investigating Tesla for "phantom braking"