Nikola Motor Company has announced it will build a $1 billion factory in Arizona.

Tesla Semi rival Nikola Motor Co. has announced plans to build a $1 billion factory on the outskirts of Phoenix. The hydrogen-electric semi-truck startup outlined its plans for its expansion in a joint statement with Arizona Governor Doug Ducey. Nikola say the state-of-the-art factory will create 2,000 jobs and generate roughly $1 billion in capital investment to the region by 2024. “Arizona has the workforce to support our growth and a governor that was an entrepreneur himself. They understood what 2,000 jobs would mean to their cities and state,” said Trevor Milton, Nikola’s chief executive. The company currently have their headquarters in Salt Lake City, Utah and will make the move to Arizona by October 2018.

After 12 months, 9 states and 30 sites, @nikolamotor has selected Arizona as home for its corporate headquarters and hydrogen-electric semi-truck manufacturing facility. The company will bring 2000+ jobs and $1 Billion in capital investment to Buckeye, AZ!

The new factory will be located close to Buckeye, at the entrance to soon to be developed ‘smart city’ Trillium. Trillium is being developed by El Dorado Holdings and JDM Partners, once completed, the new housing estate is expected to become home to more than 300,000 residents. “Conceived as the prototype “Smart City," Trillium at Douglas Ranch aligns well with Nikola Motors groundbreaking technology,” said Jerry Colangelo, Co-Founder & Partner with David Eaton and Mel Shultz of JDM Partners. “We look forward to working with everyone here to bring Nikola’s innovative products and their 2,000 professionals into this city of the future, creating a tremendous economic opportunity for Arizona.”

Trillium will be close to the other smart city in the area, Belmont, which was reported to have been invested in by the Bill Gates owned investment company Cascade Investment LLC. Other investing partner Belmont Holdings describes the smart city project saying, "Belmont will create a forward-thinking community with a communication and infrastructure spine that embraces cutting-edge technology, designed around high-speed digital networks, data centers, new manufacturing technologies and distribution models, autonomous vehicles and autonomous logistics hubs.”

Nikola have developed two hydrogen-electric trucks the Nikola One and the Nikola Two. 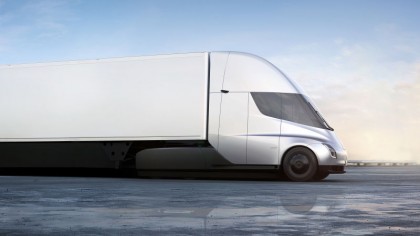 Number of Investors for Tesla's New Semi Continues to Increase

The company claims the 1,000 horsepower Nikola One will outperform current diesel trucks in weight, acceleration, stopping and safety features. The Nikola One has a boosted range of 500 to 1,000 miles, doubling that of the Tesla electric Semi which has an estimated range of 300 to 500 miles. Nikola laid down the gauntlet for Tesla, not only in their choice of name- both companies take their name from Serbian inventor Nikola Tesla- but by launching aggressively into the electric truck market with similar theatrics and big promises as Elon Musk. The Nikola One concept truck was unveiled in December 2016, the company is currently taking pre-orders that are expected to be fulfilled by 2019. All eyes will be on Nikola to deliver the ambitious plan. Supporters of the company hope the new factory will avoid long Tesla-like delays on production.

Hyundai Reportedly in Talks to Buy Boston Dynamics from SoftBank