Tesla's very first freight truck, the Tesla Semi, is designed to be all-electric with a driving range of 200 to 300 miles when fully charged. Even though many critics believe that the Tesla Semi won't outperform or even equal a traditional diesel freight truck, Elon Musk and his team are confident that their all-electric truck technology will be marketable. The Tesla Semi is set to be unveiled at the end of September as Musk promised during the annual Tesla Shareholder meeting.

By  Interesting Engineering
Aug 27, 2017
Tesla Semi Truck to be unveiled at the end of September. Tesla

Before the end of the year hastily approaches, designer and manufacturer of electric saloon and SUVs, Tesla, is set to unveil yet another all-electric vehicle. Although this time it’s not going to be a mass-market family car or a premium electric sedan. At this point in the game, the automaker is going all out with their heavy-duty, all-electric, and rumored to be autonomous, Tesla Semi. This may be the attempt of the Elon Musk-led electric automaker to penetrate the cargo shipment industry. The Tesla Semi was initially mentioned in the Master Plan: Part Deux where Elon Musk said that the electric truck would ultimately result in a safe and cost-effective freight market.

“In addition to consumer vehicles, there are two other types of electric vehicle needed: heavy-duty trucks and high passenger-density urban transport. Both are in the early stages of development at Tesla and should be ready for unveiling next year. We believe the Tesla Semi will deliver a substantial reduction in the cost of cargo transport, while increasing safety and making it really fun to operate”.

According to some sources, Tesla is working on the Semi to have a driving range of 200 to 300 miles on a single charge. However, this range has not been confirmed by Tesla nor Musk and neither the price tag of the truck has not been mentioned in any official statements. Interested buyers and industries wouldn’t have to wait that long to find out though. Musk tweeted back in April that the Tesla Semi is set to be unveiled at the end of September, which is only a few weeks away.

“A lot of people don’t think you can do a heavy duty ling range truck that’s electric but we’re confident that this can be done”.

Even though the Tesla Semi has many sceptic critics, Musk mentioned that the freight industry are actually supportive of the technology and are eager in widely using the next-generation truck. In fact, Tesla has even asked future Semi customers to collaborate with them in the design process of the truck so it would be manufactured to suit their freight needs.

“We’ve shown it to a number of organizations and they all love it. They just want to know how many they can buy and how soon. We’re getting them involved in the design process so the biggest customers of the heavy duty Tesla Semi are helping to ensure that is it specified to their needs. It’s not a mystery, they already know it’s going to meet their needs because they help decide…they told us what their needs are”.

As with all of their electric vehicles, the production output of the Tesla Semi is one of news every auto enthusiasts will be waiting for. And, of course, the all-important price tag and specific functionalities of the Tesla Semi will also be anticipated by everyone interested in this heavy duty, all-electric freight vehicle.

Once the Tesla Semi has been unveiled, the automotive appetite of Tesla enthusiasts will not be put to rest as the Model Y, although not an official name as of now, is also set to be revealed early next year. It makes you wonder if Musk sleeps at night or even take a 20-minute nap during the day. 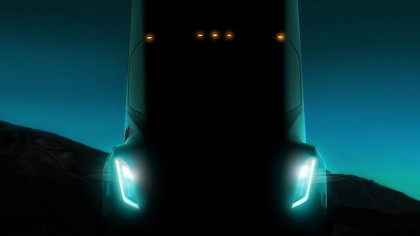