Tesla has recently entered the EV mass market with their new Model 3 and is aiming to meet a 500,000 production volume by the end of 2018. Inevitably, a new chapter is beginning to unfold for the EV company and they are committing to enhancing their automotive services by opening up 100 new Tesla service centers worldwide.

With the impending handover of the first 30 Tesla Model 3s to their owners, putting the new electric vehicle to use will definitely require some post auto care service because of its novelty. Furthermore, the forecasted 20,000 Model 3 production volume by December this year will definitely initiate a surge of auto service issues. That's why 100 new Tesla service centers are being added so they can deal with individual auto service issues smoothly. Each Tesla service centers are linked to their headquarters, allowing technicians and engineers to collaborate with any auto issues and troubleshoot them in real time.

Since all Tesla cars are advantageously electric, the company is developing new methods on how to make each of their EVs as self-improving. Tesla is basically using the concept of software updates. By using the "over-the-air updates" customers can keep their EV updated with new Tesla features and would hopefully reduce their need to visit a Tesla service center.

As Tesla cars are integrated with an onboard interface system, a designated service center could also conduct a remote diagnostic procedure to determine what the auto issue is and what is required to repair it.

Another auto care feature Tesla cars will have is the SmartAlerts service. According to Tesla, this feature will be able to guide users to conduct their own simple fix or, alternatively, it can connect individuals to any service team.

Tesla is promising to integrate an appointment scheduler to each of their EV, allowing users to book a service check-up from the driver's seat. Visiting a Tesla service center will also be a breeze as they are bringing out an automatic check-in feature in each location. These new service features are projected to optimize repair flow 4 times faster with 3 times less space required compared to conventional repair shops. 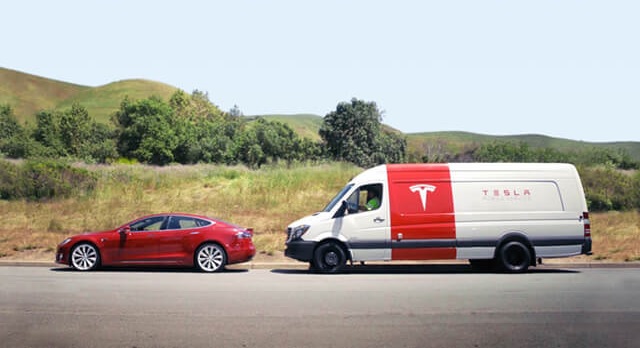 On top of the Tesla service centers, a further 350+ mobile service vans have been added to the company's fleet this year. 1,400 new technicians were also employed to provide specialty Tesla service to previous models and, of course, to the new Model 3. According to Tesla, the addition of new technicians and mobile fleet means 80% of repairs can be conducted from outside of service centers.

As Tesla entered the EV mass-market with the new Model 3, they are committing to a rapid global expansion of their automotive services. With 2017 at its half-year mark, Tesla Motors have already increased their global service capacity to threefold. With the forecasted unveiling of the Semi-Truck and Model Y, Tesla is promising to provide 24/7 global automotive service all throughout the year.