Over the weekend Elon Musk released a tweet that has garnered much criticism. His comment has recently been criticized as "over the top even for him."

Tesla and SpaceX CEO Elon Musk is known for his controversial social media responses to critics. This behavior led to one of Tesla's biggest financiers asking the billionaire to tone it down just last week.

“We are very supportive, but we would like peace and execution at this stage,” said James Anderson, a partner and portfolio manager at Baillie Gifford & Co., Tesla’s fourth-largest shareholder, in a Bloomberg Television interview last Wednesday. “It would be good to just concentrate on the core task.”

However, over the weekend Musk released a tweet that has garnered much criticism. Responding to a diver that said his submarine was a PR stunt, the entrepreneur called him 'pedo guy.'

In addition to threats from the diver to sue Musk for his remark, the event also saw Tesla's shares drop by 3.5% on Monday morning. All this comes at a particularly precarious time for the company.

Tesla has had delays in bringing the Model 3 to market due to bottlenecks and the firm is rumored to need to raise more money from investors to avoid a cash crunch. Musk has since deleted the nefarious tweet.

Musk is known for his comebacks aimed at journalists and Wall Street analysts. He has even called the beloved Thai rescue chief commander "not the subject matter expert" in response to the leader's comments regarding the practicality of Musk's submarine.

However, up to now, his posts have never seemed as unfounded as to characterize someone in such a harsh way. Twitterers at the time did ask for an explanation regarding the pedo accusation to which Musk replied: “Bet ya a signed dollar it’s true.”

Over the top, even for Musk

Department head at the University of Georgia's communications school Bryan Reber told CNN tech the latest tweet "seems over the top, even for him." Meanwhile, CEO of Brian Communications Brian Tierney said Musk is "not showing the kind of discipline of someone going to manufacture hundreds of thousands of cars."

In a previous one-hour-long interview with Bloomberg Businessweek, Musk did address his propensity to go a bit too far over trivial things. “I have made the mistaken assumption—and I will attempt to be better at this—of thinking that because somebody is on Twitter and is attacking me that it is open season." 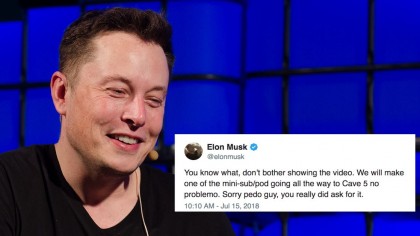 “That is my mistake. I will correct it," added the CEO showing humility and self-awareness. His statements come at a good time as his recent comments may have led to financial repercussions Musk simply cannot afford.

Tesla lost US$2 billion last year and saw its stock plunge by more than 16% since last month during a crucial time that may soon see the firm depend on investor cash. Musk is known for his innovative flair, however, and we can't wait to see how he turns this situation around.