Tesla shares fell to a two and a half year low on Wall Street analysts warning of a "code-red situation" for the company's profitability.

Tesla shares plunged to a two and a half year low today after a respected Wall Street analyst warned that the company will likely fail to hit its profitability goals for the year.

Concerns Raised Over Tesla's Plans for Second Half Profitability

Wedbush analyst Dan Ives sent a note to investors on Sunday evening that raised questions about Tesla's plans to achieve profitability in the second half of 2019, calling it a "Kilimanjaro-like uphill climb" following the company's dismal first-quarter performance.

"We continue to have major concerns around the trajectory of Tesla's growth prospects and underlying demand on Model 3 in the US over the coming quarters," Ives wrote.

"With a code red situation at Tesla," he continued, "Musk & Co. are expanding into insurance, robotaxis, and other sci-fi projects/endeavors when the company instead should be laser-focused on shoring up core demand for Model 3 and simplifying its business model and expense structure."

Ives said earlier this year after a visit to Tesla's factories in Nevada and California that Wedbush expected Tesla to outperform in 2019, but recently he has sounded alarms over "major concerns around the trajectory of Tesla’s growth prospects and underlying demand on Model 3 in the U.S. over the coming quarters."

Investors appear to share his concerns as the stock's price plunged as low as $195.25 at one point--a 7.5 percent drop. Tesla's stock closed out last week at a two and a half year low after portions of an internal company email were leaked to Electrek Blog revealing that Musk was calling for a "hardcore" review of company expenses to contain the company's hemorrhaging of cash. The company finished the first quarter with $2.2 billion in cash on hand, but Musk wrote that "this is a lot of money, but actually only gives us about 10 months at the Q1 burn rate to achieve breakeven!"

After Tesla's first-quarter loss of $702 million, lingering concerns about the actual strength of the demand for Tesla's vehicles took on new urgency as others raised fresh questions about Tesla's ability to justify its $53 billion enterprise value--significantly higher than rivals Volkswagen's ($36 billion) and BMW's ($15 billion). "The only thing that can justify such valuations is supernatural growth and best in class execution," said analysts from Evercore ISI. "Both are in question right now." 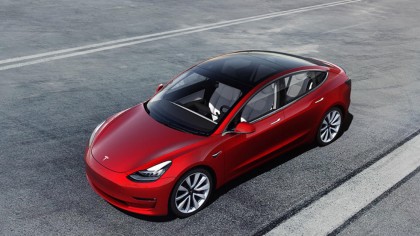 "Tesla is a car company," they added. "It needs and burns cash like a car company. The longer questions around execution and growth persist, the more difficult the valuation is to defend."

Tesla raised $2.7 billion in new investment this month from stock and bond sales--a move Ives called a "smart strategic step forward"--but this hasn't been enough to alleviate the "continued concerns around Tesla's ability to balance this 'perfect storm' of softer demand and profitability concerns which will weigh on shares until Musk & Co. prove otherwise in terms of delivering solid results over the coming quarters."