The electric carmaker saw a record-breaking third quarter with CEO Elon Musk declaring this is just the beginning.

Tesla shares soared by more than 12% after the firm's third-quarter update released Wednesday revealed a surprise profit. The impressive earnings report showed proof that CEO Elon Musk could keep his promise to start turning regular profits in the last half of 2018.

Massive thanks to Tesla owners & supporters. We wouldn’t be here without you.

"Q3 2018 was a truly historic quarter for Tesla. Model 3 was the best-selling car in the US in terms of revenue and the 5th best-selling
car in terms of volume," read the firm's report. Tesla reported average weekly Model 3 production of roughly 4,300 units per week, a GAAP net income of $312 million, GAAP Model 3 gross margin of more than 20%, and a total cash increase of $731 million.

On an earnings call with analysts, Musk thanked all the firm's stakeholders for his success, a sentiment he also shared on Twitter. "But I want to start by thanking all of our customers, employees and shareholders," said the CEO at the beginning of the recorded call.

Musk then went on to share some of the record-breaking achievements of Tesla's third quarter. "This was an incredibly stark quarter for Tesla. Model 3 production stabilized. We delivered a total of 84,000 vehicles globally, which is more than 80% of the vehicles that we delivered in all of 2017. In fact, we delivered more cars in this quarter than we did in all of 2016, in a single quarter," stated the executive.

Overall, the electric car maker posted net income of $311.5 million amounting to $1.75 per share. This is particularly exceptional considering last year saw the company report a loss of $619.4 million.

The firm's revenue also surged 70.5% from $4 billion a year ago. In the end, Tesla earned $516 million during this quarter, making it its third profitable quarter.

Profits to keep on coming

And this may be just the beginning. In the call, Musk also announced he expected the profits to keep on coming. "And moreover, we expect to again have positive net income and cash flow in Q4. And I believe our aspirations I think it will be for all quarters going forward," said the hopeful CEO. 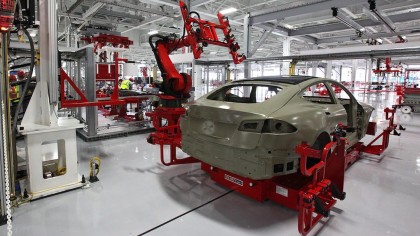 In fact, Musk declared he believed the firm could be "positive cash flow and profitable for all quarters going forward." The CEO said even quarters that would require a significant repayment, such as Q1, could be approximately flat in cash flow by end of quarters.

Finally, Musk expressed being "choked up" by the degree to which Tesla's customers cared about the firm. "I especially want to thank customers who helped - it's like, I've never even heard of this, maybe this has happened before, but I've never heard of it, of a case where a company's customer has actually cared about the future of the company so much that they volunteer their time to help the company succeed," said the grateful entrepreneur.

What comes after the crypto crash? A powerful Web3 firm expects ‘dark days’